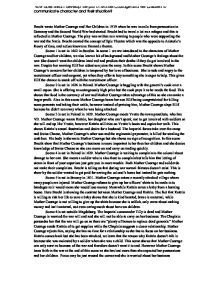 How does Brecht develop the plot of Mother Courage and Her Children to communicate character and their situation?

Brecht wrote Mother Courage and Her Children in 1939 when he was in exile from persecution in Germany and the Second World War had started. Brecht had to travel a lot as a refugee and this is reflected in Mother Courage. The play was written as a warning to people who were supporting the war and the Nazis. Brecht created the concept of Epic Theatre which was the opposite to Aristotle's theory of time, and action known as Dramatic theatre. Scene 1 is set in 1642 in Sweden. In scene 1 we are introduced to the characters of Mother Courage and her children, we also learn a bit of background and Mother Courage's feelings about the war. She doesn't want the children involved and predicts their deaths if they do get involved in the war. Despite her warning Eilif her eldest son joins the army. In this scene Brecht shows Mother Courage's concern for her children is tempered by her love of business. She is rude and angry to the recruitment officer and sergeant, yet when they offer to buy something she is eager to help. This gives Eilif the chance to sneak off with the recruitment officer. ...read more.

The Chaplain persuades her that the war will go on as there are "plenty of heroes to replace dead generals." Mother Courage sends Kattrin of to get supplies while the Chaplain suggests a closer relationship. Mother Courage rejects him, saying she has no time for a relationship as she has to focus on her business. Kattrin comes back but she has been attacked, we learn that the reason why Kattrin doesn't talk is because she was molested by a solider when she was a child. This scene shows that Mother Courage can only survive because of the war and therefore doesn't want it to end. However Mother Courage loses faith in the war at the end of this scene as she has lost more than she expected her possessions and her children. Peace may be just around the corner and she is worried about her business Scene 7 is set in 1631. Mother Courage's business is doing well and she is celebrating the success. In this scene she is wearing a silver necklace which implies she was bribed to keep quiet about Kattrin. She is now much more enthusiastic about the war than the last scene and this is probably because of her business success and the bribe. ...read more.

Scene 12. Mother Courage pays the peasant to bury Kattrin as she hauls her cart off alone, still going on to make a profit. She hasn't changed even thought she has lost her family and friends. Brecht's message in this scene is that no one can really profit from war and if they try to they will lose more then they gain. Mother Courage goes on for about 12 years and she travels though many different countries. We learn more about the characters as we see them change. An example is Eilif, at the beginning he is hot-headed and arrogant but when we see him again in scene 8 he seems more grown up and aware of the effects of war. If this play was just set over a few days we would not see that growth. However Mother Courage doesn't change throughout the play. Not having a set plot means the scenes can stand on their own and we can see how the characters react in that moment without have any of the past scenes effect them ?? ?? ?? ?? How does Brecht develop the plot of Mother Courage and Her Children to communicate character and their situation? ...read more.