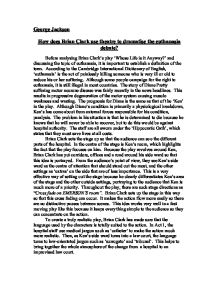 How does Brian Clark use theatre to dramatise the euthanasia debate?

George Jackson How does Brian Clark use theatre to dramatise the euthanasia debate? Before analysing Brian Clark's play 'Whose Life is it Anyway?' and discussing the topic of euthanasia, it is important to establish a definition of the term. According to the Cambridge International Dictionary of English, 'euthanasia' is the act of painlessly killing someone who is very ill or old to reduce his or her suffering. Although some people campaign for the right to euthanasia, it is still illegal in most countries. The story of Diane Pretty suffering motor neurone disease was fairly recently in the news headlines. This results in progressive degeneration of the motor system causing muscle weakness and wasting. The prognosis for Diane is the same as that of the 'Ken' in the play. Although Diane's condition is primarily a physiological breakdown, Ken's has come about from external forces responsible for his condition, paralysis. The problem in his situation is that he is determined to die because he knows that he will never be able to recover, but to do this would be against hospital authority. The staff are all sworn under the 'Hippocratic Oath', which states that they must save lives at all costs. Brian Clark sets the stage up so that the audience can see the different parts of the hospital. ...read more.

When watching the play from the audience's point of view, the lighting plays an important part in what Brian Clark is trying to portray. He uses light in different parts of the play, which relates to the way the stage is set up. To convey Ken's loneliness, he uses light and dark to enhance his scenes, especially at the end when Ken is alone on stage and the lights snap out. This is used to represent the end of his life, leaving the audience in the dark, approaching the realisation that the character they have grown to love is actually going to die. Also, the way that the stage is set up allows the lights to cross fade between scenes, making the action much more flowing. Throughout the play, Brian Clark uses each character to represent a reaction to Ken's predicament. Dr Michael Emerson, being the Consultant Physician and a very important figurehead in the hospital staff hierarchy, has a very dim view of Ken's euthanasia thoughts, probably reflecting his professionalism and that he has to sign the Hippocratic oath. On the very last page of the book however, Emerson knows that legally he has to let Ken die, so he changes his views and can now offer his help to Ken. ...read more.

His central argument is summed up in his own words; 'my consciousness is the only thing I have and I must claim the right to lose it'. Ken is angry at the whole situation, but mainly at his lack of freewill. He argues that physically he is dead already. At the end of the play, the characters and the audience end up in the same boat. They both feel very involved with Ken after spending the entire story looking after him or watching how he handles his condition. It is only when Dr Emerson spells out 'unconscious in three days, dead in six at the most' that the reality of Ken's situation is appreciated. The last scene is very symbolic in terms of the use of light. The lights 'snapping out' represent Ken's death. Overall, the theatre offers Brian Clark many different possibilities of dramatising the euthanasia debate. Due to the use of exits, entrances, black comedy, characters and scenery, the euthanasia debate can be portrayed in a different way than it would if this play was a novel or a film. The contrast between audience and playwright is very well explored to create a debate on the topic of euthanasia that remains unresolved thirty years after the play was first produced. ...read more.