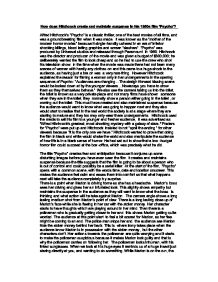 How does Hitchcock create and maintain suspense in his 1960s film 'Psycho'?

How does Hitchcock create and maintain suspense in his 1960s film 'Psycho'? Alfred Hitchcock's "Psycho" is a classic thriller, one of the best movies of all time, and was a groundbreaking film when it was made. It was known as the "mother of the modern horror movies" because it single-handily ushered in an era of inferior shocking killings, blood letting graphics and screen "slashers". "Psycho" was produced by Universal studios and released through Paramount in 1960. Hitchcock was the director and producer of the movie and was given a budget of $800,000; he deliberately wanted the film to look cheap and so he had to use the crew who shot his television show. In the time when the movie was made there had not been many scenes of women with hardly any clothes on and this came to a huge shock to the audience, as having just a bra on was a very rare thing. However Hitchcock explained the reason for filming a woman only in her undergarments in the opening sequence of Psycho: "Audiences are changing....The straightforward kissing scene would be looked down at by the younger viewers....Nowadays you have to show them as they themselves behave." We also see the camera taking us into the toilet, the toilet is known as a very private place and not many films have shown someone when they are in the toilet, they normally show a person either going in the toilet, or coming out the toilet. ...read more.

Therefore when he invites Marion for lunch he again seems like a generous and courteous man, but he does not take the food into Marion's cabin as he is scared that his mother might see him. When Marion and Bates sit down for some "sandwiches and milk" bates says "oh sorry I didn't hear you over the rain." This makes Bates look very suspicious as the light was on in the Gothic looking house so therefore he must have seen Marion's car pull up. Yet when she eats, he comments she eats "like a bird." This is very strange as his parlor is filled with stuffed birds of prey. However this creates suspense in the audience as to why he was watching her eat because the birds of prey are linked to killing. The camera angles tend to switch a lot when he is watching her eat and it constantly changes from Bates to Marion, Bates to Marion and we can also see the huge shadows of the birds of prey. Bates refers to "we" quite a lot when Marion asks about his private life. He says "we all go a little mad sometimes." The audience at this point seems to become a little confused to who the second person may be. ...read more.

The last part of this scene was the zoom in of Marion's eye, and the shower rain still drizzling down. So it created suspense and made us anxious of whom this murderer is. There is a cross fade shot of her eye; blood going down the plughole and the shower head, note here juxtaposition has been used to put different images together. The music in this film was used to add more tension, and to add to the viewer's feelings towards the different scenes. This was the first time this technique was used. Throughout the film different cameras were used to manipulate the viewers into thinking about one problem, like the money, the cameras focused on the money in some scenes, which mislead the audience. The camera uses long shots of the house, to make it look more distant and menacing. It took about a week to adjust the cameras in the right places for the shower scene. The film was cleverly put together using props such as chocolate sauce as blood for the shower scene, and because it was in black and white, the viewers could not tell the difference. The scene where Marion is thinking about what to do with money, slow tens music is always played in the background to add tension the audience. This film was very terrifying in its time and today many people who watch this it movie find it as scary as when was made back in 1960. ...read more.