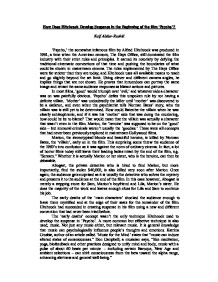 How Does Hitchcock Develop Suspense in the Beginning of the film 'Psycho'?

How Does Hitchcock Develop Suspense in the Beginning of the film 'Psycho'? Kaif Abdur-Rashid 'Psycho,' the somewhat infamous film by Alfred Hitchcock was produced in 1961, a time when the American censors, The Hays Office, still dominated the film industry with their strict rules and principles. It earned its notoriety by defying the traditional cinematic convections of that time and pushing the boundaries of what could be shown in mainstream cinema. The rules implemented by The Hays Office were far stricter than they are today, and Hitchcock uses all available means to reach and go slightly beyond the set limit. Using clever and different camera angles, he implies things that are not shown. He proves that innuendoes can portray the same image and retract the same audience responses as blatant actions and pictures. In most films, 'good' would triumph over 'evil,' and whatever side a character was on was painfully obvious. 'Psycho' defies this unspoken rule by not having a definite villain. 'Mother' was undoubtedly the killer until 'mother' was discovered to be a skeleton, and even when the psychiatrist tells Norman Bates' story, who the villain was is still yet to be determined. How could Bates be the villain when he was clearly schizophrenic, and if it was his 'mother' side that was doing the murdering, how could he be to blame? That would mean that the villain was actually a character that wasn't even in the film. Marion, the 'heroine' was supposed to be on the 'good' side - but immoral criminals weren't usually the 'goodies.' ...read more.

The close-up does imply that the money is important, but we do not know that it is the money which shapes the rest of the film. However, the next close-up of the open suitcase soon enables us to realise that Marion's intentions are less than noble. The close-up of the money reoccurs, and if the audience hadn't acknowledged it previously, they are almost forced to notice it then. Although it does increase the suspense in the sense that the audience begin to wonder what Marion wishes to do with the money, it's almost like spoon-fed suspense. It is as if Hitchcock is afraid that the audience may have missed the first close-up and would then be denied of the emotions he wished them to feel, so he does it again, just to make sure. The result of this is that Hitchcock arouses the audience's curiosity by making it obvious that the money plays a very big role in the film. The close-ups of Marion when she is driving away from her home lets the audience examine all her anxious facial expressions whilst listening to voice-overs of what is taking place elsewhere. These bring them closer to the 'heroine' and involve them in her thoughts and actions. The close shots of her with little clothes on also make the audience feel as if they know her on a personal level. All this is useful as it makes them react more when she is killed. Hitchcock uses a lot of extreme close-ups to draw various sensations from the audience. ...read more.

Like the rain and the dark, it creates a spooky atmosphere, and the audience know that something frightening will occur in that very location. Hitchcock is more interested in creating suspense than shocking his audience. During Abogast's death, it would have been more shocking if 'mother' had jumped out of nowhere and killed him. Instead, the door opened slowly while the audience writhed in their seats, wanting to warn Abogast before it was too late. Both shocks and suspense are short lived, with suspense only lasting slightly longer. It may have been a better idea for Hitchcock to use a combination of the two instead of dealing with only suspense. Since this scandalous film that dealt with madness, obsessions and matricide in a depth previously unexplored, there have been hundreds more, and hence 'Psycho' is considered to be the beginning of a new genre. Many of the techniques were either new or not even considered to be used in that context. Even before the film was released, the audience were in suspense as to what it was about. There were no previews, no launch campaigns or reviews. When the film was finally released, people were only allowed to watch it from the very beginning. The cast and crew were sworn to secrecy about the plot and people who had seen it after it was released were advised not to tell those who hadn't. There were strict rules about not allowing people to enter after the film had commenced. All this created suspense for the audience before they even walked into the cinema, and Hitchcock managed to sustain this suspense until the final scene. ...read more.