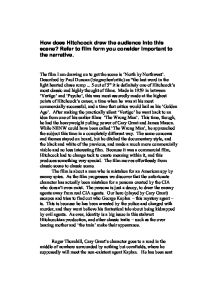 How does Hitchcock draw the audience into this scene? Refer to film form you consider important to the narrative.

How does Hitchcock draw the audience into this scene? Refer to film form you consider important to the narrative. The film I am drawing on to get the scene is 'North by Northwest'. Described by Paul Duncan (biographer/critic) as "the last word in the light hearted chase romp ... 5 out of 5" it is definitely one of Hitchcock's most classic and highly thought of films. Made in 1959 in between 'Vertigo' and 'Psycho', this was most assuredly made at the highest points of Hitchcock's career, a time when he was at his most commercially successful, and a time that critics would hail as his 'Golden Age'. After making the practically silent 'Vertigo' he went back to an idea from one of his earlier films 'The Wrong Man'. This time, though, he had the heavyweight pulling power of Cary Grant and James Mason. While NBNW could have been called 'The Wrong Man', he approached the subject this time in a completely different way. The same concerns and themes stayed on board, but he ditched the documentary style, and the black and white of the previous, and made a much more commercially viable and no less interesting film. Because it was a commercial film, Hitchcock had to change tack to create meaning within it, and this produces something very special. The film moves effortlessly from classic scene to classic scene. The film is about a man who is mistaken for an American spy by enemy spies. As the film progresses we discover that the unfortunate character has actually been mistaken for a persona created by the CIA who doesn't even exist. ...read more.

After the thunderous sound of the bus, a huge chasm of silence is left. Here is a man who is an urban tiger. In hectic bustle of the city he is on sure ground, and king of his castle. Here he is just a defenceless man. What follows is a medium shot of Roger; he is holding his hands together looking around. Behind him are just fields. So far we have had three shots after the bus - Roger, Rogers POV and Roger again. All these three have emphasised how alone Roger is, by showing the background, how desolate and barren it is. The fourth shot supports this - again it is Rogers POV - we have now seen four different angles, all 360 degrees around Roger. Here, it is the editing that is drawing us in, through its emphasis on Roger's isolation, he is completely alone with nowhere to go. It is emphasised through the editing, but clearly stated through the mise-en-scene. Roger is completely surrounded by nothing, accentuating his vulnerability. To put it another way, the nothingness engulfs him. The is all clearly shown by his POV shots, all that surrounds him is desert, the land of the free and wild men. A sight that completely conflicts traditional mise en scene for thrillers and would be far more at home in a Western. It helps to feel what he is feeling, it makes us feel alone and defenceless. The previous shots established that information, these shots help us to empathise. We cut back to the medium shot of Roger, who is growing increasingly anxious. ...read more.

Roger is yet to realise that this will be the threat, which makes us more anxious. "It's necessary to show the approaching plane, even before Cary Grant spots it, because if the shot is too fast, the plane is in and out of the frame too quickly for the viewer to realise what 's happening." -Alfred Hitchcock As the plane moves further toward him, he begins to realise this, though he does not move. As we watch it fly towards us from a POV shot from Roger's position, our anxiety is increased again, as we are placed in his shoes again. A reaction shot shows him only just grasping what is about to happen, and the speed of the editing as it cuts from POV to reaction shot increases as the plane gets closer. The POV shot is always from the same position, which worries us because the plane is getting closer and we are going nowhere. Our anxiety is increased by our helplessness. Roger manages to finally get out of the way just as plane flies over him. The suspension of the scene gives way to action. Hitchcock draws us into this scene in a number of ways. He uses the audience's previous knowledge to turn every red herring into a likely suspect. He uses POV shots to make us empathise with the character, and reaction shots to give us information. We feel things and use our imagination because of our knowledge. He uses false alarms, editing and the subversion of conventions. He creates tension masterfully, and tension is not just a part of fear that can be played upon to create anxiety, but it is also a great way to create suspense, to make people want to find out more. To draw them in. ...read more.