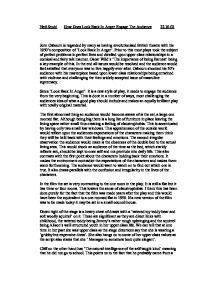 How Does Look Back In Anger Engage The Audience

Neil Studd How Does Look Back In Anger Engage The Audience 22.10.02 John Osbourn is regarded by many as having revolutionised British theatre with his 1950's composition of `Look Back In Anger'. Prior to this most plays took the subject of perfect problems in perfect lives and dwelled upon upper class relationships in a comical and fairy tale manner. Oscar Wild's `The importance of being Earnest' being a key example of this. In the end all issues would be resolved and the audience would feel satisfied that everyone was to live happily ever after. Osbourn shocked his 50's audience with his masterpiece based upon lower class relationships being entwined with violence and challenging the then widely accepted issue of masculine supremacy. Since `Look Back In Anger' it is a new style of play, it needs to engage the audience from the very beginning. This is done in a number of ways, most challenging the audiences idea of what a good play should include and makes an equally brilliant play with totally original material. ...read more.

If a new version of the film was to be made today it may be set in a small council house. Down right of the stage is a heavy chest of draws with a `tattered toy teddy bear and soft woolly squirrel' on it. These are significant as they are direct links with childhood, the tattered teddy being Jimmy's rather rough upbringing and the squirrel being Alison's well structured youth in her upper class life. We can tell that at one time in her past she was upper class as the stage directions say that she is wearing a `grubby but expensive dress'. She also hangs on to some of her upper class values as the script also states that she ` Manages to somehow look quite elegant'. Cliff on the other hand has `The natural intelligence of the self taught kind' meaning that he did not go to school. This points us to the fact that he probably came from a lower class family who did not care about his education. ...read more.

The reason for his misconduct towards Alison can not fully be explained in act one or the rest of the play for that matter. Even though this would keep the audience engaged trying to find a reason. Some of the things said, mostly by Jimmy would have been very controversial at the time but the audience would probably enjoyed this as they would have realised that it did not hurt anyone and could be quite entertaining, in a sinister way. Jimmy's lines at the end of act one, where he says that he hopes Alison will have a baby and then it will die. This still remains shocking even today so in 1950 this would have put the play on a knife edge. Again, capturing the audience and making them want to know what else will happen. Today though, times have moved on and the content of plays is virtually unlimited. This makes `Look Back In Anger' seem rather customary. But what must be remembered is that it is this play that made today's theatre normal. ...read more.