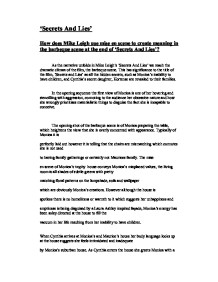 How does Mike Leigh use mise en scene to create meaning in the barbeque scene at the end of 'Secrets And Lies'?

'Secrets And Lies' How does Mike Leigh use mise en scene to create meaning in the barbeque scene at the end of 'Secrets And Lies'? As the narrative unfolds in Mike Leigh's 'Secrets And Lies' we reach the dramatic climax of the film, the barbeque scene. This has significance to the title of the film, 'Secrets and Lies' as all the hidden secrets, such as Monica's inability to have children, and Cynthia's secret daughter, Hortense are revealed to their families. In the opening sequence the first view of Monica is one of her hovering and stencilling with aggression, connoting to the audience her obsessive nature and how she wrongly prioritises materialistic things to disguise the fact she is incapable to conceive. The opening shot of the barbeque scene is of Monica preparing the table, which heightens the view that she is overly concerned with appearance. Typically of Monica it is perfectly laid out however it is telling that the chairs are mismatching which connotes she is not used to having family gatherings or certainly not Maurices family. ...read more.

As Monica opens the door to the downstairs toilet she boasts, 'I wanted to give it a Mediterranean feel', the toilet is all shades of peaches and yellows also highlighting Monica being pretentious and her obsession with materialism. She then includes the garage and the airing cupboard in her tour to show off her trophy house, which is strange, but then again connotes Monica's priorities and materialistic values. She then leads them upstairs to show them her very white feminine 'fairytale' master bedroom, the more Monica brags the more Cynthia makes spiteful remarks, 'I can't see Morris thrashing about on there'. Jane also comments its 'like a hotel' although Jane said this as a compliment it can be seen negatively as there is no cosy warm feel to the room. Jane then quite wrongly states 'you've got everything Monica' this is highly ironic, because the one thing Monica wants most in life she cannot have so she hides this with a fa�ade. Cynthia feels envious about all the money Monica has spent on her house when she lives in a run down small house with her daughter Roxanne. ...read more.

Pathetic fallacy is used when the cake is being bought out to Roxanne, the sky is grey and storm clouds are gathering with the digetic sound of thunder being used. Low lighting is also used creating a pensive atmosphere. As each secret is revealed the storm clouds shift bringing the family closer together and leading to Monica crying in Cynthia's arms, Leigh delivers the message to the audience that honesty is an important element of a strong relationship and without it the relationship will fall apart, 'why can't you tell them... im sorry but its almost destroying our relationship'. Leigh's message is portrayed thought Maurice's speech 'Why can't we share our pain'. One of the central theme to the film is family relationships and honesty however could initially be thought to be a film on racial issues when Hortense is mistaken to be a Jehovah's witness by Monica, The ending scene is gloomy and the atmosphere is ominous, however it is strangely inspiring and we are left with a feeling of hope and a sense of optimism for the family ...read more.