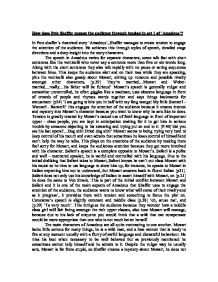 How does Pete Shaffer engage the audience through tension in act 1 of &amp;#145;Amadeus&amp;#146;?

How does Pete Shaffer engage the audience through tension in act 1 of 'Amadeus'? In Pete shaffer's theatrical story 'Amadeus', Shaffer manages to create tension to engage the attention of the audience. He achieves this through styles of speech, detailed stage directions and a deep insight into the story characters. The speech in Amadeus varies for separate characters, some talk fast with short sentences like the venticelli who never say a sentence more than five or six words long. Along with the short sentences they also talk rapidly with no pause or acting sequences between lines. This keeps the audience alert and on their toes while they are speaking, plus the venticelli also gossip about Mozart, stirring up rumours and possible rivalry amongst other characters, [p.39] 'they're married...Mozart and Weber-married...really...his father will be furious!' Mozart's speech is generally vulgar and somewhat uncontrolled, he often giggles like a madman, uses obscene language in front of crowds of people and rhymes words together and says things backwards for amusement [p24] 'I am going to bite you in half with my fang wangs! My little Stanzerl - Wanzerl - Banzerl!' this engages the attention of the audience because it creates interest and mystery into Mozart's character because you want to know why he acts like he does. ...read more.

Mozart lacks little serious for many things, he is a wild man, and a lose cannon that is ready to fire at any moment usually with a flurry of awful language and distasteful behaviour. He tries his best when necessary to be well behaved but as previously mentioned he sometimes cannot help himself and he admits to it. Despite the vulgar way he usually acts, Mozart is far from stupid, so Shaffer creates a mystery about Mozart, he does not reveal until much further on in the story why Mozart acts so immaturely and uncivilised for a man that is so gifted and educated in culture, language and music, amongst other things. Shaffer does put Mozart forward as a disgusting vulgar man, but still makes him out to be a 'good guy' in the story who has a warm kind heart deep down, [p.45] 'oh Stanzerl, do not cry. Please do not cry... I cannot bear it when you cry...' . In turn, Shaffer makes Salieri out to be the plotting, stuck up 'bad guy' despite his well mannered and considerate behaviour amongst others. Salieri is very polite and well spoken; he is considered as a great composer and well respected amongst his friends and colleagues. He is somewhat snobbish and stuck up however, and considers himself to be superior and above Mozart, this is why he gets so wound up and frustrated when Mozart out classes him with his music. ...read more.

The setting description shows how the play should look on stage, a lot of the settings are grand and regal with magnificent surroundings with expensive furniture and decorations, [p.23] '...two elegantly curtained windows surrounded by handsome subdued wallpaper...'. This gives the audience a better feel of the story and allows them to get more involved with the plot. The lighting changes for given situations in the story to create the right mood, this gives the scenes involved greater tension.. For example, lighting is used to make Joseph out to be important and regal [p.28] 'Quick light change. The emperor Joseph is revealed standing in bright light before the glided mirrors and the fireplace.' Music shows Character feeling and in some cases gives greater insight into the plot, [p.29] 'Salieri ...strikes up his march on the keyboard.. as Mozart struts in,...he stops and listens....becoming aware of Salieri playing hi march of welcome.' This extract shows how Mozart marches to the music of Salieri and has his initial reaction to Salieri's music, this keeps the attention of the audience because it reveals the first side to the rivalry between Mozart and Salieri. Pete Shaffer creates tension using all these factors, they all revolve around the rivalry between Mozart and Salieri to create more curiosity and mystery into what the outcome of the conflict will be, this is how Shaffer engages the attention of the audience using tension. ...read more.