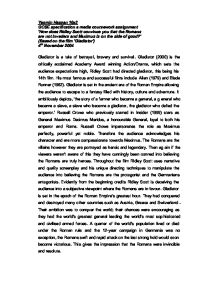 'How does Ridley Scott convince you that the Romans are not invaders and Maximus is on the side of good?'

Yasmin Hassan 10x3 GCSE specification a media coursework assignment 'How does Ridley Scott convince you that the Romans are not invaders and Maximus is on the side of good?' (Based on the film 'Gladiator') 4th November 2004 Gladiator is a tale of betrayal, bravery and survival. Gladiator (2000) is the critically acclaimed Academy Award winning Action/Drama, which sets the audience expectations high, Ridley Scott had directed gladiator, this being his 14th film. His most famous and successful films include Alien (1979) and Blade Runner (1982). Gladiator is set in the ancient era of the Roman Empire allowing the audience to escape to a fantasy filled with history, culture and adventure. It ambitiously depicts, 'the story of a farmer who became a general, a general who became a slave, a slave who became a gladiator, the gladiator who defied the emperor.' Russell Crowe who previously starred in Insider (1999) stars as General Maximus Decimus Meridus, a honourable General, loyal to both his emperor and Rome. Russell Crowe impersonates the role as Maximus perfectly, powerful yet noble. Therefore the audience acknowledges his character and are more compassionate towards Maximus. The Romans are the villains however they are portrayed as heroic and legendary. Then again if the viewers weren't aware of this they have cunningly been conned into believing the Romans are truly heroes. Throughout the film Ridley Scott uses narrative and quality screenplay and his unique directing techniques to manipulate the audience into believing the Romans are the protagonist and the Germanians antagonists. Evidently from the beginning credits Ridley Scott is deceiving the audience into a subjective viewpoint where the Romans are in favour. ...read more.

This shows the audience the sophistication of the Roman army making it easier for the audience to trust them and believe they are truly good. The music shifts to a string instrument- a solo flute and the camera then moves from a long shot to a medium shot to see hooded and cloaked man being guarded by emotionless soldiers in such a way where the aged man is at the centre watching down on Maximus and his men. We assume him to the emperor - Marcus Aurelius Caesar, as he is a man of high importance and prestige. The aged man has big bags under his eyes due to loss of sleep, wrinkles overlapping wrinkles; he is so frightened and vulnerable. Ridley Scott created such a character because the audience are more compassionate to a character who is frightened than one consumed with power and greed. Therefore the audience want the Romans to succeed so they can protect the Emperor. Consequently, the audience are convinced that the Romans are the side of good before the storyline has commenced. Hence Ridley's handiwork has already taken place. The audience's first impression of Maximus is a man trapped in a world full of allegiance, loyalty and strong cultural belief. He is living in a world full of solidarity, as the soldiers become his surrogate family. The audience are aware of this because as the General goes past his soldiers to his position on the frontline, he fills his comrades with determination and physically shows his camaraderie and allegiance by giving manly hugs, eye contact and consoling smiles. ...read more.

They raise their swords to celebrate victory. The music slowly fades to a slow string melody as the red creeps in, becoming the dominant colour, washing away the blue, authenticating the defeat over Germany. The camera then zooms in to, Emperor Caesar who is still guarded and hooded, however the recent victory over Germany proves no difference as his face is still frightened and he is still vulnerable, Marcus Aurelius Caesar is still blue still part of the old way of life and excluded from the victory. His mind ponders on to, what is to happen to Rome now? Gladiator is directed in such a brilliant style and unique approach that manipulates worldwide audiences. Before the launch of the media coursework I was deceived into believing the Romans were good. Gladiator was one of my favourite films and still is today, as I can appreciate the intensity and skill that went into the production of Gladiator that I never acknowledged before. During the course of this coursework I have gained much needed skills that I can use throughout my life to come. I have learnt to recognize and identify when I am trying to be mislead to believing false information, this cannot only be used in films but in adverts and programmes. I can use my newfound skills to enter adulthood prepared. The way director's influence your judgement is very intellectual, the use of lighting, sound, characters, speech and special effects all combined successfully convinces viewers what is wanted of them to believe. Film addicts and shoppers are all example of puppets where directors and mangers pull our strings to make us believe what is wanted to benefit them. Therefore Ridley Scott is a master at being cunning and deceitful but we admire and praise him for it. ...read more.