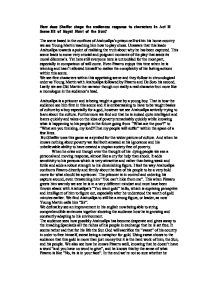 How does Shaffer shape the audiences response to characters in Act II Scene III of Royal Hunt of the Sun?

How does Shaffer shape the audiences response to characters in Act II Scene III of Royal Hunt of the Sun? The scene based in the confines of Atahuallpa's prison cell within his home country we see Young Martin teaching him how to play chess. Unaware that this leads Atahuallpa towards a point of realising the truth about why he has been captured. This scene leads to some very crucial and poignant moments of the play that seeds its moral dilemma's. Yet here still everyone here is untroubled for the most part, especially in comparison of will come. Even Pizarro enjoys this time when he is winning and hasn't allowed himself to realise the complexity of his lasting actions within this scene. We see five characters within this appetising scene and they follow in chronological order as Young Martin with Atahuallpa followed by Pizarro and De Soto his second. Lastly we see Old Martin the narrator though not really a real character but more like a monologue in the audience's head. Atahuallpa is a prisoner and is being taught a game by a young boy. ...read more.

We find Atahuallpa to still be a strong figure, or leader, as now Young Martin calls him "Sir". We definatley see an improvement in his english now being able to string comprehendible sentences together showing the audience how he is growing and constantly adapting to his environment. The audience sees how possibly Atahuallpa has become desperate and gives away to the invading Spaniards all the riches of his people in exchange that he is set free. It seems rather sad that for his life the Sun God will sacrifice the "sweat" of his country in order to free himself, sweat being a metaphor for gold. Using sweat shows to the audience that this gold is more than just money but it is the hard work of him, the Sun, and his people. We also see how he knows Pizarro well, knowing that he doesn't have a word "and you have no word to give", and he knows this by the sense of what Pizarro is like "No, its is in your face". In the end we're not so sure whether he believes Pizarro or not, however he does seem to trust him and gives away his country. ...read more.

He is the loyal second in command as Shaffer wants us to believe but we also see him losing faith in his leader, "Pray God we don't pay bitterly for this" and he leaves ashamed. Young Martin is a very minor character in this scene and has more practical use than any real use. The audience can see that he is still but a young boy eager to impress his commander. This is useful because it is in stark contrast to Old Martin who is cynical and dark and we have glimpses of how things must turn out in the future for this young boy so full of life to end up like this. So in conclusion we see that Shaffer has shaped the audiences responses to each of the characters through a mix of language, stage directions and literary devices. We see how everyone seems to fit into place and helps each other meld into one smooth running scene. We see later on in the play we see the large repercussions of this very small scene ending up in the death of very many people and of course the complete changing of the audience's perception of these characters. ...read more.