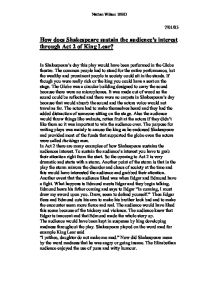 How does Shakespeare sustain the audience's interest through Act 2 of King Lear?

7/01/03 How does Shakespeare sustain the audience's interest through Act 2 of King Lear? In Shakespeare's day this play would have been performed in the Globe theatre. The common people had to stand for the entire performance, but the wealthy and prominent people in society could sit in the stands. If though you were really rich or the king you could have a seat on the stage. The Globe was a circular building designed to carry the sound because there were no microphones. It was made out of wood so the sound could be reflected and there were no carpets in Shakespeare's day because that would absorb the sound and the actors voice would not travel as far. The actors had to make themselves heard and they had the added distraction of someone sitting on the stage. ...read more.

What happens is Edmund meets Edgar and they begin talking. Edmund hears his father coming and says to Edgar "In cunning, I must draw my sword upon you. Draw, seem to defend yourself." Then Edgar flees and Edmund cuts his arm to make his brother look bad and to make the encounter seem more fierce and real. The audience would have liked this scene because of the trickery and violence. The audience knew that Edgar is innocent and that Edmund made the whole story up. The audience would have been kept in suspense by king developing madness throughout the play. Shakespeare played on the word mad for example King Lear said "I prithee, daughter do not make me mad." Now did Shakespeare mean by the word madness that he was angry or going insane. ...read more.

On the one hand there was King Lear who was actually going out of his mind and there was Edgar who was pretending to be a mad man called Tom. The audience could see the king being driven mad by his daughters and Edgar using madness as a disguise. The audience would have enjoyed this scenario. So we can see from all these points and only examining just one Act how Shakespeare kept the interest of his audience. He used puns, jokes, riddle, violence, trickery, madness and more than one thing was happening at the same time. There were troubles going on in two different families at the same time; there was the arguing in Lear's family and the deceit and lies in Gloucester's family. I think one of the things that made Shakespeare famous and successful was that he knew what the audience liked, wanted to see, and would find funny and interesting. Nathan Wilson 10BD ...read more.