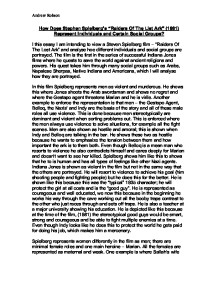 How Does Stephen Spielberg's "Raiders Of The List Ark" (1981) Represent Individuals and Certain Social Groups? I this essay I am intending to view a Steven Spielberg film - "Raiders Of The Lost Ark" and analyse hoe different individuals and social groups are portrayed. The film is the first in the series of successful Indiana Jones films where he quests to save the world against ancient religions and powers. His quest takes him through many social groups such as Arabs, Napalese Sherpas, Native Indians and Americans, which I will analyse how they are portrayed. In this film Spielberg represents men as violent and murderous. He shows this where Jones shoots the Arab swordsman and shows no regret and where the Gestapo agent threatens Marian and he is virile. Another example to enforce the representation is that men - the Gestapo Agent, Belloq, the Nazis' and Indy are the basis of the story and all of these male roles all use violence. This is done because men stereotypically are dominant and violent when sorting problems out. This is enforced where the men always use violence to solve situations, for example all the fight scenes. Men are also shown as hostile and amoral; this is shown when Indy and Belloq are talking in the bar. He shows these two as hostile because he wants to emphasize the tension between them and how important the ark is to them both. ...read more.

Spielberg does this because it is based on the basic storyline: good guy sees girl, kills hundreds of enemies and rescues the girl; Marian is the girl. Marian character disagree with the typical girl as she smokes, drinks and lives on her own in foreign lands and has also killed people. This is done because it is original and she is different to other women at the time. Spielberg representation of Americans is very biased. They are shown as courageous, in charge and virile. An example is where Indy is in the cave and he takes the idol. Spielberg does this because he is American and the film is made for Americans so it would have to have a feel good theme. He also does this because they are the good guys of the film - the all mighty nation that takes on Germany. Americans are also shown as mercenaries'. Examples are Marian selling the piece to Indy and her getting paid to go with him. I think Spielberg does this because they put a price on everything and pay for it. E.g. they sell the gold idol even though it is priceless to the native Indians. Ethnic social groups are represented as the complete opposite to the Americans'. The Americans' are shown as courageous and in charge whereas the Ethnic groups such as Arabs. ...read more.

The last major contemporary concern in the film is the Vietnam War. The American people felt scarred by this - a small country defeating a superpower. The American people felt better when they saw one man take on a huge nation and win. This is represented I the film because it was on Spielberg's mind at the time so influenced the film. In the "Raiders Of The Lost Ark" the audience is positioned in the film to make the Americans look huge, they are all powerful and no one can beat them. This is shown obviously in the film when Indiana Jones - one American takes o a huge nation such as the Germans and wins. This is shown in the film because Spielberg is American and the film is for an American audience. The audience is positioned in the film to show men as typical 1935 men and typical good guys. We know this because the men are represented as courageous and well educated, strong and brave. This is done because the audience at the time liked leading men roles and women had very little independence. Women are depicted as weak, maternal and vulnerable. This is also very stereotypical for the time but there is change with Marian and her freedom. The audience is positioned to see ethic groups as expendable, exploited and violent. This is done because America is a 1st world country and no other 3rd world countries matter. Overall I like the way everything has been represented because any other way wouldn't have worked as well. Andrew Robson ...read more.