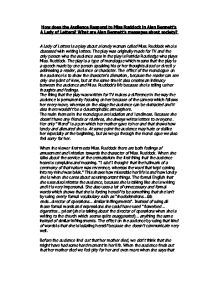 How does the Audience Respond to Miss Ruddock in Alan Bennett's A Lady of Letters? What are Alan Bennett's messages about society? A Lady of Letters is a play about a lonely woman called Miss. Ruddock who is obsessed with writing letters. The play was originally made for TV and the only person who the audience sees in the play is Patricia Routledge who plays Miss. Ruddock. The play is a type of monologue which means that the play is a speech made by one person speaking his or her thoughts aloud or directly addressing a reader, audience or character. The effect of the monologue on the audience is to show the character's alienation, because the reader can see only one point of view, but at the same time it also creates an intimacy between the audience and Miss. Ruddock's life because she is telling us her thoughts and feelings. The thing that the play was written for TV makes a difference in the way the audience is permanently focusing on her because of the camera which follows her every move, whereas on the stage the audience can be distracted and it also there wouldn't be a claustrophobic atmosphere. The main themes in the monologue are isolation and loneliness. Because she doesn't have any friends or relatives, she always writes letters to everyone. ...read more.

The time is passing and her life doesn't change at all. Also the fact that she doesn't have anyone close to her makes it even worse. In later stages of the play the audience sees how Miss. Ruddock is accepting the outside world and the people around her. She used to know all of her neighbours and the doctor and the vicar as well. When she first meets with the doctor once again being extremely formal and she starts complaining about the neighbour's kid. She doesn't go to her doctor for a prescription or a medical advice, she just wants to complain about the "kiddy". That shows once again how lonely she is and that she needs to talk to someone. When the doctor prescribes her medicine which doesn't work, she starts complaining again how the pills don't do what they are supposed to. In my opinion here is shown how pathetic she is and this is also the affect on the audience. This is also quite humorous in a way, because she also wants to write a letter once again to the Swiss company. "The doctor said it would be easier to give me new tablets and anyway I couldn't write, the firm was Swiss." Also when she meets the local vicar who is a "young fellow in a collar and tie..." ...read more.

For example in the last scene Miss. Ruddock is wearing a tracksuit instead of a dress. Also she is starting to use slang words instead of Standard English and the way that she pronounces the words is very different form before. "They have words for things I didn't know there were words for, and in fact I swear myself on occasion now, though only when the need arises." It is also quite ironic how at the beginning she was complaining about the people smoking in front of the church and now she is smoking. "They've got me smoking now and again as well. I mean, I shan't ever be a full-time smoker..." In conclusion I feel that Bennett's dramatic monologue sends a lot of messages to the audience about society. It tells us that we shouldn't ignore and discriminate against the elderly people and there is also a place for them in our society. Although the young people are the future this is what it is now so we should respect them. In a way we as an audience watching Miss. Ruddock and disliking her, we fail her as well as the whole society, but it's not only her fault that she is like that. The more someone is being rejected the more they start to get isolated and alienated just like Miss. Ruddock and the fact that she lost her mother makes it even worse for her. ?? ?? ?? ?? ...read more.