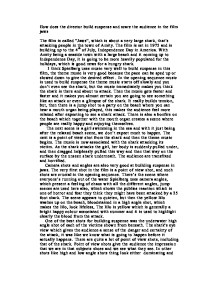 How does the director build suspense and scare the audience in the film jaws The film is called "Jaws", which is about a very large shark, that's attacking people in the town of Amity. The film is set in 1975 and is building up to the 4th of July, Independence Day in America. With Amity being a seaside town with a large beach and it coming up to Independence Day, it is going to be more heavily populated for the holidays, which is good news for a hungry shark. I think Spielberg uses music very well to build suspense in this film, the theme music is very good because the pace can be sped up or slowed down to give the desired effect . In the opening sequence music is used to build suspense the theme music starts off slowly and you don't even see the shark, but the music immediately makes you think the shark is there and about to attack. Then the music gets faster and faster and it makes you almost certain you are going to see something like an attack or even a glimpse of the shark. It really builds tension, but, then there is a jump shot to a party on the beach where you can hear a mouth organ being played, this makes the audience feel more relaxed after expecting to see a shark attack. ...read more.

Since he was not born on Amity, he will never truly belong, and any ideas he has will be suspect. The mayor who does everything he can, without caution, to keep the beaches open. The audience views Brody's wife and children in their home which makes the audience feel like they actually know the characters. Not only does he need to protect the citizens and visitors of Amity from the danger of the shark but he also wants to protect his wife and children. Again the audience feel sympathy for him when he admits his fear of boats and the water. The audience also sympathizes with Brody because he fights against the money grabbing mayor. The money that summer visitors bring to the town are much more important to this man than the safety of these people. A group of fishermen then capture a twelve foot tiger shark. The town of Amity feel a sense of relief as they believe the waters around Amity to be safe again and that this must be the shark carrying out the attacks. Brody and Hooper go to the dock to inspect the shark Hooper promptly announces that there is no way that this could be the shark that killed Chrissie Watkins and Alex Kintner. ...read more.

The director avoids showing the shark as it could be anywhere and that's what he wants you to think, the audience believe that the shark could be directly below the boat which is quite frightening. Again yellow is used with the barrels, when the shark begins to attack the boat the audience think that's the end of the film and that the three of them are going to die. This is especially tense after the brutal attack on Quint which really terrifies the audience. The barrels are attached to the harpoons which are shot at the shark, the barrels float and they can see where the shark is. After being shot by a harpoon on many occasions and destroying the Orca the shark ends up with an oxygen tank in its mouth which Brody shoots. After a couple of missed shots and blows the shark to pieces. There has been a personal battle between Brody and the shark throughout the film, and Brody has finally won .We can now relax slightly although Brody still has to get back to land without a boat as the shark destroyed it. So the closing scene shows Hooper and Brody kicking their way back to shore in a tranquil ocean which I think represents the fact that all the chaos is over ...read more.