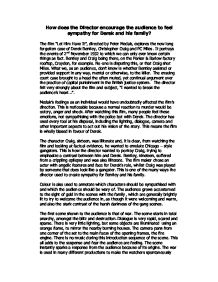 How does the Director encourage the audience to feel sympathy for Derek and his family?

How does the Director encourage the audience to feel sympathy for Derek and his family? The film "Let Him Have It", directed by Peter Medak, explores the now long forgotten case of Derek Bentley, Christopher Craig and PC Miles. It portrays the events of 2nd November 1952 to which we can only ever know certain things as fact. Bentley and Craig being there, on the Parker & Barlow factory rooftop, Croydon, for example. No-one is disputing this, or that Craig shot Miles. What we, as an audience, don't know is whether Bentley assisted or provided support in any way, mental or otherwise, to the killer. The ensuing court case brought to a head the often muted, yet continual argument over the practice of capital punishment in the British justice system. The director felt very strongly about the film and subject, "I wanted to break the audience's heart...". Medak's feelings as an individual would have undoubtedly affected the film's direction. This is noticeable because a normal reaction to murder would be outcry, anger and shock. After watching this film, many people feel these emotions, not sympathising with the police but with Derek. The director has used every tool at his disposal, including the lighting, dialogue, camera and other important aspects to act out his vision of the story. This means the film is wholly biased in favour of Derek. The character Craig, sixteen, was illiterate and, it is clear, from watching the film and looking at factual evidence, he wanted to emulate Chicago - style gangsters. This is how the director wanted to portray Craig, trying to emphasize a contrast between him and Derek. Bentley, nineteen, suffered from a crippling epilepsy and was also illiterate. The film maker chose an actor with angelic features and face for Derek's role, whilst Craig was played by someone that does look like a gangster. This is one of the many ways the director used to create sympathy for Bentley and his family. ...read more.

This gives the viewers the impression that each round in Craig's weapon is meant for that particular officer. This again makes the audience feel that he's there to kill, not just to get away, condemning him as some sort of maniac. The next thing shown is Chris firing randomly into the air as he moves closer to the camera. It shows him as being much more confident than before, as though this event was his rite of passage, his destiny. His teeth are clenched, ready for war and he wears a crazy smile, as though he is indeed insane. This confidence is not shared by Bentley, however, who is shown to be scared and worried. Later on, the same actions are taking place but as Craig walks amongst the skylights on the roof they light up, signifying that police were now inside the building. Police are shown to be in the very stairwell that Derek and the DC are hiding behind. An officer approaches the door, but before he can open it, another says "Here, let me". This is ironic as the next sequence of events will show. The colour inside this tiny room is once again gold, annotating these characters as friendly. As the first officer jumps out from the door to join up with his colleague he is immediately shot by Craig. As this happens, the speed of the film slows, showing you the full gore of the fall the policeman has to take. The music then turns low as if to say 'that wasn't a good idea...'. As DC Fairfax runs inside shouting "Get me a fucking gun", Derek wanders to the body. The camera then switches to a different shot, this one as though the audience are in Derek's head. The camera tentatively swoops from normal eye level to the body and then back up. He then gazes back at Craig, muttering "You shot him". ...read more.

As the spirit enters the home, the audience can see the colours have changed. What was once lit with gold and yellow is now illuminated using the same chilling blue of that fateful night. This signifies that the mood inside the house has changed from warm and welcoming to cold and unforgiving. The family are shown crying on each other's shoulders and the camera pans round the room to the clock, which is now the only thing audible over the crying. As the whimpers grow louder, the clock stops. This signifies that time has run out for Derek. As the credits begin to roll, the crying is faded out and silence follows. Medak has used every tool at his disposal to promote sympathy for Bentley and his family. The lighting is dark and harsh when showing characters that bring Derek down, while those that are friendly towards him are lit using gold and yellow. The music is repetitive and unforgiving, creating links to previous scenes it the audience's mind. Often there are large gaps with no music whatsoever to emphasize the action taking place. The camera often switches from a third person view to the action as though it were Derek to show the audience exactly what he can see. The camera also persists in showing the audience of Derek's suffering. The dialogue of many other characters involves swearing regularly, but not in the case of Derek or his family. They are shown to be as near angelic as humanly possible. Derek's dialogue is childlike and predictable, another method of showing the audience his mental age. The director has achieved his goal tremendously well. The director, in my view, has strayed from the truth very little, but has neglected to include certain aspects of the story altogether to promote sympathy for Bentley and his family. The film is, indeed biased, and that is clear in the audiences mind as the film ends, but then, most people, having been given the opportunity to make this film, would have produced it as biased. ...read more.