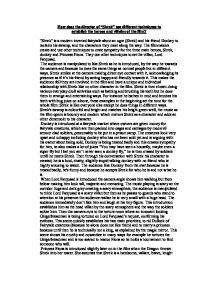 How does the director of &quot;Shrek&quot; use different techniques to establish the heroes and villains of the film?

How does the director of "Shrek" use different techniques to establish the heroes and villains of the film? "Shrek" is a modern inverted fairytale about an ogre (Shrek) and his friend Donkey to reclaim his swamp, and the characters they meet along the way. The filmmakers create and use other techniques to crate sympathy for the three main heroes, Shrek, donkey and Princess Fiona. They use other techniques to set the villan, Lord Farquaad. The audience is manipulated to like Shrek as he is introduced, by the way he towards the camera and because he does the same things as normal people but in different ways. Shrek smiles at the camera making direct eye contact with it, acknowledging its presence as if it's his friend by acting happy and friendly towards it. This makes the audience fell they are involved in the film and have a unique and individual relationship with Shrek like no other character in the film. ...read more.

When Lord Farquaad is introduced the camera angle shows him walking but from below making him look tall, majestic and menacing. The music playing is scary an the corridor huge and dark grey creating a scary atmosphere, the audience is manipulated to think Lord Farquaad is a scary villan but then as he passes to guards who stand to attention at his presence the audience realise he is very small with a huge head. The audience immediately don't like him and laugh at his tiny figure. This introduction establishes him as the head villan by the scary atmosphere and the way the soldiers solute him. Then the camera cuts to the torture room where an innocent looking Gingerbreadman is being tortured on Lord Farquaad's request, confirming his evilness. This scene quickly establishes his two main priorities, to rid Dullock of Fairytale creatures (because he alone does not like them) and to marry a princess because until then he is technically not a king, as explained by the magic mirror. ...read more.

Farquaad marries princess Fiona only so he can be king and when he finds out she is an ogar he tries to lock her back in the tower. This shows Farquaad's selfishness and evilness with no regard to anyone else. Every event that lord Farquaad is involved in clearly portrays him as a villan. Shrek is hated and feared wherever he goes simply because of his outward appearance. The villagers try to attack him, Farquaad sets a band of knights to kill him, the man at the entrance of Dullock runs away from him, everyone is scared of him (with exception to Donkey and Fiona) and he hates it "they judge me before they even know me". This creates a lot of sympathy for him. Sympathy is also felt for Shrek because he loves Fiona but can never be with her. Shrek is liked because he is the hero and very brave, for example he rescues Donkey and Fiona. He fights evil without killing and he wins the fight eventually. Every fairytale (included modern inverted fairytales) has a main hero and Shrek is the film's main hero. ...read more.