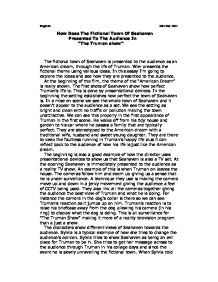 How Does The Fictional Town Of Seahaven Presented To The Audience In &quot;The Truman show&quot; represent the American Dream

English Kiri Rai 10H How Does The Fictional Town Of Seahaven Presented To The Audience In "The Truman show" The fictional town of Seahaven is presented to the audience as an American dream, through the life of Truman. Wier presents the fictional theme using various ideas. In this essay I'm going to explore the ideas and see how they are presented to the audience. At the beginning of the film, the theme of the "American Dream" is really shown. The first shots of Seahaven show how perfect Truman's life is. This is done by presentational devices. In the beginning the setting establishes how perfect the town of Seahaven is. In a mise en scene we see the whole town of Seahaven and it doesn't appear to the audience as a set. We see the setting as bright and clean with no traffic or pollution making the town unattractive. We can see this properly in the first appearance of Truman in the first scene. He walks off from his tidy house and garden to his car where he passes a family that are typically perfect. ...read more.

When she gets a chance to explain the crew bring an additional actor playing Sylvia's "dad". She quickly tries to explain everything but the actor covers up her story by making her seem mental. This allows them to show that's Seahaven is real and that whatever she said was a lie. Once this has happened the audience feel a lot of guilt for Truman and want what's best for him. However the characters also add back to the idea of the "American dream". The characters of Meryl and Marlon create another view of Seahaven towards Truman, making him think he has the perfect dream. They both present Truman's life as being perfect to the audience leading to why the actual program was made. Meryl is perceived as the perfect wife and she does everything she can do to be perfect like smiling, being constantly happy, doing household chores, and looking perfect. Being such a good wife reminds Truman of how lucky he actually is. Marlon always talks about how lucky Truman is to have an office job and constantly compares himself to him. ...read more.

Christoff has come up with the idea that if he was born on a television he can die on television as well. Christoff becomes so over powered it shows the audience that he can do what he wants because he controls Truman' s life. All this change in characters and story makes the audiences view of Seahaven change towards the end. The whole idea of Seahaven being the American dream is changing to a nightmare for Truman because of his dreams clashing with a reality TV show. The audience change to wanting Truman out of Seahaven and into real life which is unexpected from such an obsessed audience. When Truman is sailing away to reality Christoff changes the weather trying to stop him from leaving the island any further. The audience within the film encourage him to hold on to the boat and keep going. This unexpectedness is a different turnout from the one expected because if he does carry on the show will end, but the audience want this to happen for Truman's sake In conclusion the fictional town of Seahaven is presented to the audience in many ways. It changes from start to finish helped by characters and presentational devices making the audience have a different perspective on what the American dream really has to offer. ...read more.