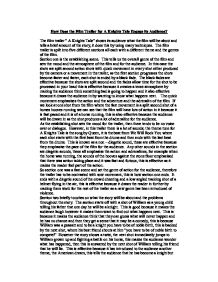 How Does the Film Trailer for A Knights Tale Engage its Audience?

How Does the Film Trailer for A Knights Tale Engage its Audience? The film trailer " A Knights Tale" shows its audience what the film will be about and tells a brief amount of the story, it does this by using many techniques. The film trailer is spilt into five different sections all each with a different theme and the genres of the film. Section one is the establishing scene. This tells us the overall genre of the film and sets the mood and the atmosphere of the film and for the audience. In this case the shots are split second action shots with quick movement in every shot either produced by the camera or a movement in the trailer, as the first section progresses the shots become faster and faster, each shot is ended by a black fade. The black fades are effective because the shots are split second and the fades allow time for the shot to be processed in your head this is effective because it creates a tense atmosphere by making the audience think something bad is going to happen and it also effective because it draws the audience in by wanting to know what happens next. The quick movement emphasises the action and the adventure and the adrenalin of the film. If we look at one shot from the film where the fast movement is a split second shot of a horses hooves ...read more.

two, there is a non - diegetic sound of William's heart beat, and as the match progresses in jump cuts the heart beat gets louder and louder until a diegetic sound comes of the lance smashing into the opponents heart and killing him. This is effective because it makes the audience tense and raises a climax and then anti - climax when Will wins. So section two briefly tells what the story will be about and the problems he faced and how it was resolved and makes us think that Will has got away with being an illegal knight. Section three introduces love and romance and comedy aspects. This section relieves the audience for a while and comes away from the action and starts to introduce other problems in the film such as romance and comedy. This time the fades in-between the shots are white, which is less dramatised and more light hearted. Will meets his girlfriend and everything goes well until the end of the section when she tells him that she is just a "silly boy with a horse and his stick," this is effective because it makes the audience want to know why she has said this to him and will they get back together, this draws the audience back into the trailer. Then the comedy kicks into the trailer. ...read more.

In between the rest of the information is short clips of action summarising the film, this is effective as it jogs the audiences mind and makes them want to watch the actual film more and more to find out what happens. Then at the end, only the romance problem has been resolved, this is effective because it makes the audience think that everything is going right for William and reduces the climax, and the dialogue that concludes the clips are famous quotes from Romeo and Juliet, an allusion: Your name means no matter to me, As long as I can call you my own. This indicates to the audience that William has got romance back, however, it suggests that his other problems have not been resolved, this is effective as it is the end and it tells the audience that his rival has not been dealt with and William could still be killed, so therefore the audience are made to go and see the actual film to find out what happens. Overall, I would say that film trailer is very effective as it tells the story briefly; it manages to engage it's audience throughout the film and it sets the scenes and genres properly. It manages to produce climax and anti - climax effectively and the ending engages its audience perfectly as it doesn't resolve the film fully, making the audience wanting to se the actual film. ...read more.