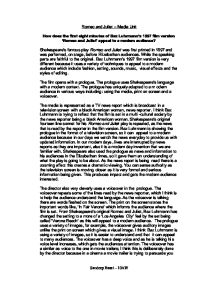 How does the first eight minutes of Baz Luhrmann's 1997 film version 'Romeo and Juliet' appeal to a modern audience?

Romeo and Juliet - Media Unit How does the first eight minutes of Baz Luhrmann's 1997 film version 'Romeo and Juliet' appeal to a modern audience? Shakespeare's famous play Romeo and Juliet was first printed in 1597 and was performed, on stage, before Elizabethan audiences. While the speaking parts are faithful to the original. Baz Luhrmann's 1997 film version is very different because it uses a variety of techniques to appeal to a modern audience which include fashion, setting, sounds, music, visual effects and the styles of editing. The film opens with a prologue. The prologue uses Shakespeare's language with a modern context. The prologue has uniquely adapted to a modern audience in various ways including: using the media, print on screen and a voiceover. The media is represented as a TV news report which is broadcast in a television screen with a black American woman, news reporter. I think Baz Luhrmann is trying to reflect that the film is set in a multi-cultural society by the news reporter being a black American woman. Shakespeare's original fourteen line sonnet for his Romeo and Juliet play is repeated, as the news that is read by the reporter in the film version. Baz Luhrmann is showing the prologue in the format of a television screen, so it can appeal to a modern audience because in our days we watch the news everyday to provide us with updated information. ...read more.

When the Capulets and Montagues fight scene appears they hold guns called 'Sword 9mm'. This is very cleverly been adapted by the director because in Shakespeare's time there wouldn't be guns there would only be swords so when Benvolio says: 'put up your Swords', he's actually stating the guns brand. When the petrol station scene appears there are many devices that capture the viewer's eye for example, 'Phoenix gas' billboard, which has a very ironic slogan 'Add more fuel to your fire' this is ironic because the petrol station explodes. In addition there are many other presentational devices like logos and slogans which are used, for instance, 'Hark communications' which mean listen. Furthermore, 'Lamour' which means love in French coincidently has the same design as the coca cola logo. I think Luhrmann has used these various devices because it reminds the audience and makes them feel familiar with modern things such as, billboards which in the present day of life we see every day. Baz Luhrmann has used a range of camera shots, angels and editing to enhance the films presentation. At the beginning, when the news is being read, the camera zooms into the television screen as the news reporter is speaking. When the reporter has finished the news, the shot zooms into the TV screen extremely fast and uses a wipe shot. ...read more.

As Abra appears in the petrol station he drops a match and grinds it with his feet. Luhrmann has done this to create a moment of drama and suspense. In addition as the fight scene appears at the petrol station the volume increase so we can hear the gun shot pistols, wind blowing and the squeaking of the sign 'Add more fuel to your fire'. The director has used these effects during the fight scene because it is noisy and disturbing so it makes the audience alert. Furthermore the director has used these several effects to take hold of the audience's attention and to connect the action taking place to the music and effects used. Luhrmann is only doing what Shakespeare did four-hundred years ago, retelling a popular story through his own eyes. Luhrmann has presented us with some differences from Shakespeare's original idea, but still keeps the story intact. Ironically, the Elizabethan language that Luhrmann decided to keep in his film was one of the main aspects that made the play inaccessible to a modern audience. Luhrmann breaks the language barrier through the modern actions, gestures, clothing, cars and weapons. We can see these aspects in the first eight minutes. Baz Luhrmann does this so the audience feels very comfortable with everything going on the screen for it is all familiar and easily understandable through the interpretations of the film makers. ?? ?? ?? ?? Sandeep Bassi - 10AW ...read more.