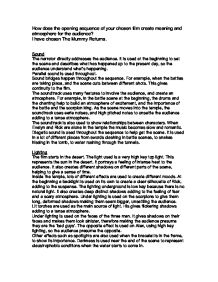 How does the opening sequence of 'The Mummy Returns' create meaning and atmosphere for the audience?

How does the opening sequence of your chosen film create meaning and atmosphere for the audience?

I have chosen The Mummy Returns.

The narrator directly addresses the audience. It is used at the beginning to set the scene and describes what has happened up to the present day, so the audience understand what’s happening.

Parallel sound is used throughout.

Sound bridges happen throughout the sequence. For example, when the battles are taking place, and the scene cuts between different shots. This gives continuity to the film.

The soundtrack uses many features to involve the audience, and create an atmosphere. For example, in the battle scene at the beginning, the drums and the chanting help to build an atmosphere of excitement, and the importance of the battle and the scorpion king. As the scene moves into the temple, the soundtrack uses eerie noises, and high pitched notes to unsettle the audience adding to a tense atmosphere.

The soundtrack is also used to show relationships between characters. When Evelyn and Rick are alone in the temple the music becomes slow and romantic.

Diegetic sound is used throughout the sequence to help get the scene. It is used in a lot of different places from swords clashing in battle scenes, to snakes hissing in the tomb, to water rushing through the tunnels.

The film starts in the desert. The light used is a very high key top light. This represents the sun in the desert. It portrays a feeling of intense heat to the audience. It also creates different shadows on different parts of the scene, helping to give a sense of time.

Inside the temple, lots of different effects are used to create different moods. At the beginning a backlight is used on its own to create a clear silhouette of Rick, adding to the suspense. The lighting underground is low key because there is no natural light. It also creates deep distinct shadows adding to the feeling of fear and a scary atmosphere. Under lighting is used on the scorpions to give them long, deformed shadows making them seem bigger, unsettling the audience.
Lit torches are used as the main source of light. His gives flickering shadows adding to a tense atmosphere.

Other effects such as spotlights are also used when the bracelet is in the frame, to show its importance. Darkness is used near the end of the scene to represent claustrophobic conditions when the water starts to come in.

The scene begins with a master shot of the entire place where the following scene takes place. It includes the whole background for reference to later in the film. An establishing shot is also used it shows all of both the armies. It helps to set the scene for the audience.

As the battle takes place, mixtures of medium long shots and mid shots are used. This means all the action can be seen, while facial expressions can still be seen. High angles are used throughout increasing the audience’s sense of power over the army, involving them.

In the desert, long shots are used to show the army in the desolate surrounding. It increases the feeling of desperation of the men.

At the end of the desert scene a very high angle is used on the scorpion king so he looks small, making the audience almost pity him.

Inside the temple, a lot of mid shots and close ups are used. This helps to increase the feel of the small tunnels. It also shows the characters are all important. Straight angled shots are used to put the audience on the same level as all the main characters. The audience do not need to feel sorry for, or to feel intimidated by any of the characters.

Point of view shots are used to give a characters perspective of looking down a corridor, in the case of Rick when he is in the temple. It shows the fear the characters must be feeling appeals to the audience directly to emphasize with them.

At the end of the scene, a lot of medium long shots are used to enable the audience to see all the action taking place as it builds to a climax.

As the sequence begins, the camera uses a lot of fast panning. This is to increase the tense mood and the feeling of the action. It pans across the army showing everyone waiting to fight. This effect sets the scene for the audience and shows the expanse of the army.

The scorpion king is tracked to increase his important. It is fast which creates excitement.

A steadicam is used a lot to show different aspects of the moving battle but to keep the shots smooth.

A handheld camera is also used to convey an atmosphere of chaos to the audience and to involve the audience, making them feel as if they are actually there.

When the sequence cuts to the section inside the temple the camera uses tracking to help the audience crate an emotional attachment with Rick. Zooming in is used when Rick and Evelyn meet. It gives the section a romantic feel and gives the audience a feeling of closeness increasing a relaxed atmosphere, which is then opposite to other scenes.

A lot of panning is used throughout the rest of the scene, for example, when Alex runs across the temple floor. He is also tracked to show he is important in that particular scene, making the focus on him. It also involves the audience a lot more in the film.

Zooming in is used when the bracelet is in this box in the vision. This shows it’s important and focus’s the audience’s attention on it. Zooming is also used when one of the three men says “we do not want to wake the Gods”. This gives greater importance to these words, making the audience take more notice them.

The camera pans Evelyn and Rick as they run away from the water towards the end of the sequence. It also zooms into their facial expressions, appealing to the audience because they are slightly comical.

During the battle scene at the beginning of the sequence a lot of invisible editing it used. This is to be unobtrusive, so the audience’s attention is not taken away from the battle.

Jump cuts are used to move from the battle to the desert, then back to another battle then to the inside of the temple. This is a common feature of their type of genre.

Elliptical cuts are also used. For example, when Rick walks down a corridor, and then is with Evelyn after a jump cut.

Invisible editing is used most frequently throughout which is common for this type of film.

The outside settings are mainly digitally created because they are too vast to create from scratch, and to detailed and precise to use a location which already exists. The inside setting is very detailed. The walls all have Egyptian markings on them, and are all covered with dirt and cobwebs. It’s also very dark. They all give an atmosphere a terror and mystery.

The props used are typical of 1930’s, which is when the film is set. The types of guns and other weapons used indicate that the film is not set in modern times. The tools being used to dig with are not modern technology. The torches of fire are used as the main source of light while they are underground, which it would have been in 1933.It helps to set the scene. It also adds to the atmosphere because of the flickering shadows created.

The costume is also typical of the 1930’s. The men wear shirts and trousers, with Alex wearing shorts and trousers. The costume also helps to portray heat of the desert. The three men, for example, wear head dresses and loose shirts. Other costume includes Indiana Jones styles exploring clothes Rick wears. The clothes are all in good condition, which represents they have a lot of money, which is proved later in the film, when they arrive home to their mansion.

The important characters in the scene always stand in the foreground of the shot, often against a stationary background. However the characters are sometimes positioned all at one side this unsettles the audience, therefore involves them.

The film doesn’t begin with equilibrium, but equilibrium is established quite early on in the sequence, when the scorpion king is killed. However two new incidents happen to complicate the story. The first being that the three men enter who have been sent to kill the O’Connell’s. The second being that taking the bracelet from its box causes the temple to collapse.

A binary opposite of good Vs evil is made between the O’Connell’s and the three men is established as soon as they enter.

The sequence is organised in a non-linear format. It makes use of flashbacks and visions.

The genre of this film is action/adventure. Generic conventions are used. For example, there’s a lot of action in a short space of time. Theres also a feeling of adventure when the characters are exploring in the temple. Fast paced loud music and guns and fighting are also generic conventions used in this sequence. There are some aspects however which are subverted. The idea of mummies is also fantasy possibly suggesting hybridisation. There are also some aspects of comic language.

We can tell from this sequence characters are going to be important. The scorpion king is talked about a lot and is shown using low angled shots for the majority of the time, which also increases his sense of importance.

We can tell Evelyn, Rick and Alex are important because the whole sequence is based around what they are doing and why.

The scorpion king is an important character. This is shown by actors such as his name, which h includes the word king giving him high status. His clothing is better than that of his army, which he also leads. He also wears lots of gold jewellery.

Rick is shown to be a fighter. He is always carries guns and bullets with him and he creeps around at the beginning of the temple scene. He also likes to do things by brute force shown in the comments Evelyn says, such as “let’s do it your way” then he would bang down a door.

Alex is shown to be clever. He knows a lot about ancient Egypt, because he talks to Rick about a statue, he also understand hieroglyphics, show later in the film.

Vladimir Prop’s theory fits into this film in some aspects. The villain; impoteph, the donor; being Izzy who later on in the film helps them a lot, and the magical helper being Ardis who helps them throughout. Some characters do not fir in however, such as the father’s daughter.