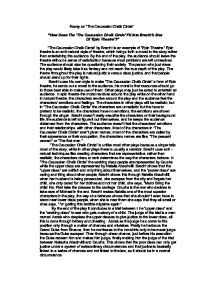 &quot;How Does The 'The Caucasian Chalk Circle' Fit Into Brecht's Idea Of 'Epic Theatre'?&quot;

Bring the child! No, First take the dresses to the carriage. Grusha is the one who decides to take care of Michael in the end. Brecht makes Natella one of the most superior characters in the play, the way she behaves shows that she shouldn't even have to stand near lower class people, when she is near them she says that they all smell or shes says, "I'm getting this terrible migraine again." By the end of the play it concludes to a trial between the "upper class" and the "working class" to see who gets custody of a child. The judge of the trial is a man named Azdak who despises the upper classes to give justice to the lower class, all this is done through bribery and cheating. Azdak as the judge has come to this position only through a matter of chances and mistakes. Firstly he harbours the Grand Duke from Shauva, then he confesses to the Ironshirts only to be made judge because the Duke escaped. ...read more.

The play is also set over a long period of time of approximately three years. This is shown through Michael, he is a baby at the beginning of the play and grows up to be a toddler by the end, this also shows that the play is unrealistic and anti-natural, Michael couldn't of been an actor on the stage, the other actors and actresses would have had to pretend that there was a child on the stage. One of Brechts other main aspect of Epic theatre is that each scene stands for itself. In "The Caucasian Chalk Circle" each scene does stand for itself and doesn't flow on forward, the scenes don't build up to carry on in the next scene. Each scene can be like a mini play, the play can finish at the end of any one of the scenes. In natural plays, one scene makes another and each scene builds up to conclude the final scene of the play. ...read more.