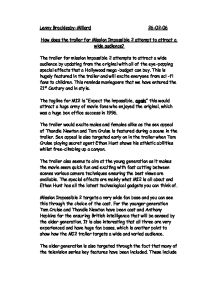 Lenny Brocklesby-Millard 26-02-06 How does the trailer for Mission Impossible 2 attempt to attract a wide audience? The trailer for mission impossible 2 attempts to attract a wide audience by updating from the original with all of the eye-popping special effects that a Hollywood mega-budget can buy. This is hugely featured in the trailer and will excite everyone from sci-fi fans to children. This reminds moviegoers that we have entered the 21st Century and in style. The tagline for MI2 is "Expect the impossible, again" this would attract a huge army of movie fans who enjoyed the original, which was a huge box office success in 1996. The trailer would excite males and females alike as the sex appeal of Thandie Newton and Tom Cruise is featured during a scene in the trailer. ...read more.

The older generation is also targeted through the fact that many of the television series key features have been included. These include the notorious theme tune, famous lines including "your mission, should you chose to accept it" these would all be major factors in luring the fans of Bruce Gellers original hit series to the cinema. The trailer excites the audience at the very start by displaying the notorious Paramount logo. The audience would be attracted because it is widely recognised as the biggest movie distributing company in the industry. The trailer uses many techniques to try to appeal to a wide audience including various camera angles well. The panning shot at the start of the trailer establishes the setting very well, it does a very good job of showing how inhospitable the desert is as no signs of live can be seen. ...read more.

Tom Cruise and Anthony Hopkins are huge stars among the cast and bring huge fan bases to see each of the films they star in, this is a great way to get a wide audience to go and view the movie. They elaborate on each of the actor's qualities in the trailer e.g. Tom Cruise sex appeal and Anthony Hopkins British accent and authority. Symbolism is used in the trailer when Tom Cruise is in the position of crucifixion and when the religious see this in the trailer it will interest them and entice a new sector of the viewing public to the cinema. Overall MI2 uses heaps of techniques in the trailer to try to entice a wide as possible viewing audience to the cinema. The fact that MI2 is following on from a cult television show and hit original movie alone will rake in the audiences. ...read more.