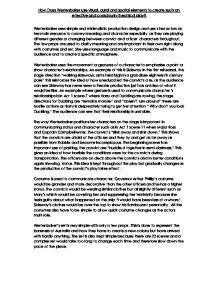 How Does Wertenbaker use visual, aural and spatial elements to create such an effective and consciously theatrical play?

How Does Wertenbaker use visual, aural and spatial elements to create such an effective and consciously theatrical play?

Wertenbaker uses simple and minimalistic production design and uses her actors as her main resource to convey meaning and character especially as they are playing different gender or changing between convict and officer characters throughout. The few props are used to clarify meaning and are important in their own right along with costumes and set. She uses language and music to communicate with the audience and to create a specific atmosphere.

Wertenbaker uses the movement or gestures of a character to emphasise a point or show character’s relationships. An example of this is Sideway in the first rehearsal, the stage direction “walking sideways, arms held high in a grandiose eighteenth century pose” this reinforces the idea of how uneducated the convicts are, as the audience can see Sideway has never seen a theatre production just has an idea of what it would be like. An example where gesture is used to communicate character’s relationships is in Act 1 scene 7 where Harry and Duckling are rowing, the stage directions for Duckling are “remains morose” and “doesn’t turn around” these are hostile actions as Harry is desperately trying to get her attention “ Why don’t you look Duckling.” The audience can see that their relationship is unstable.

The way Wertenbaker positions her characters on the stage is important in communicating status and character such as in Act 1 scene 11 when Major Ross and Captain Campbell enter, the convicts “slink away and sink down.” This shows that the convicts are afraid of the officers and they try and get as far away as possible from Robbie and become inconspicuous. The beginning scene has important use of positing, the convict are “huddled together in semi-darkness.” This gives an idea of how horrible the conditions were for the convicts during transportation. The officers are on deck above the convicts and in better conditions again showing  status. This idea is kept throughout the play but gradually changes as the production of the convict’s play takes effect .

Costume is used to communicate character, Governor Arthur Phillip’s costume would be grander and more decorative than the other officers and he has a higher status. The convicts would be wearing similar clothes but all slightly different such as Mary’s which would be covering her and suppressing her femininity because she feels guilty about what happened on the ship “I would have been less of a whore”.  Sideway’s clothes would be over the top to show his flamboyant personality . All the costumes also have to be simple to allow quick costume changes as the actors multi-role.

Wertenbaker’s set is very simple with only a few props. This is done to represent the bareness of Australia and how they have to create a new colony but have arrived with hardly anything. The set is also kept simple because there are 22 scenes and a complex set would take too long to change each time and therefore slow down the pace of the piece.

Props are used sparsely but are very important in showing character’s situations. Example of this are the whipping equipment need in act 1 scene 1, they are used to clearly show the audience how the convicts were treated on the ships and the punishments. The play book is used throughout the play when the convicts are rehearing or talking about the play as this is one of the main themes of Our Country’s Good , however not many other books are used and this emphasises that the convict are uneducated and many can’t read. Ralph’s dairy and the picture of his wife are important props in showing his character. Ralph idolises his wife as something pure “I might kiss your picture as usual.” He uses his diary to write his thoughts showing he doesn’t feel he can talk to the other officers and is disturbed with the new land and behaviour of the convicts and officers. Food is mention throughout the play “if I was rich, I’d eat myself sick” but it is never used as a prop this highlights the lack of food in the colony.

Wertenbaker uses gun shot sound effects at the beginning of the play in scene 3 Act 1, as the officers are shooting birds this reminds the audience that they have just arrived on a new land and are already destroying its nature and wildlife. The other sound effect Wertenbaker specifies in the play is drumming which occurs at the end In the last scene as the convicts go on stage, this symbolise a parade that a new colony might give as celebration. It also creates excitement for the play.

The triumphant music of Beethoven’s fifth symphony is played at the very end as an introduction to The Recruiting Officer, this makes the audience happy and excited and reflects what the convicts would be feeling at that time. Other music Wertenbaker may want to be used during the play, especially the aboriginal scenes is didgeridoo music as this is a native instrument to Australia.

The Language Wertenbaker uses shows character, an example of this is Liz’s monologue in Act 2 scene 2 where she use lots of slang “born under a ha’penny planet” this shows the audience she is uneducated. In contrast to Liz,  Arthur is very educated and we can see this due to the literary and historical reverences he mentions when backing up an argument “In the Meno, one of Plato’s great dialogues.” This is a way that difference in education shows the split between convicts and officers. Language is also used to show change in characters, for example at the beginning Wisehammer is rough and has no hope for the future “alone, frightened, nameless in this sinking hole of hell”, however as the play progresses we actually see him as being one of the more educated convicts. “Abject: a man without hope.” In the last scene we see him thinking of the future and with restored hope “I’ll write a play about justice.”

Our Country’s Good would be more suitable for a proscenium arch stage because it communicates the bareness of the new land as no-one is on the other side unlike a transverse stage. Wertenbaker wanted to use a cyclorama to symbolise Australia and this would need to be upstage and therefore would work best in proscenium as it has a back wall. The third reason is the convicts and officers could easily be separated and shown in their groups and more easily commutate status and power.

The lighting is very important in staging the play. The lighting would of be harsh blues and yellows to represent the climate of Australia. This lighting is the most effective way of making the audience aware of the different climate and habitat of Australia and how hard it was for the convicts and officers to adapt to the change. The lighting would also be used to show night and day as some of the scenes are during the night, this would create an atmosphere for the piece.

Wertenbaker chose to create an obviously theatrical piece of drama instead of a piece of realism because she wanted the audience to see the social message the play contained,  how drama can reform and educate people. A theatrical piece is the most effective way to do this as it allows both the actors and audience to see the story from both sides of the colony due to the multi-rolling actors.