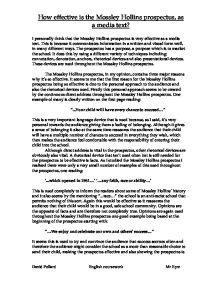 How effective is the Mossley Hollins prospectus, as a media text?

I know this because as I studied the prospectus I realised a paragraph that was said on page one was then repeated onto page seven. The paragraph started with: '...Your child will enter a school that has a modern, rigorous focus on TEACHING & LEARNING...' I personally think that this certain paragraph was inserted twice into the Mossley Hollins prospectus because again it has direct address but also has "...TEACHING & LEARING..." in capital letters to make it stand out, giving the audience the impression again of success and also a environment with high teaching and learning within the classrooms. It seems to me that the second reason the Mossley Hollins prospectus is effective in my opinion is because of the presentational techniques used to improve the visual form of the Mossley Hollins' prospectus. The first presentational technique I realised whilst studying the Mossley Hollins prospectus was the use of, glossy high standard photographs, that's suggest to me and the audience that the school and it's teaching are also high quality. These photographs are photographs from different points within Mossley Hollins high school. A large number of the photographs taken are used as visual evidence of the relationships between the teachers and pupils. One of these pictures has an anchor that's clearly says: '...We succeed because we learn together...' ...read more.

These include the various font styles. The text techniques seem to be used in attempt to get the prospectus noticed. The different fonts, font colours, bullet points and also italics it's very effective in terms of getting the prospectus attention. An example of all these different varied text techniques are based on the high quality waxed paper, making the waxed paper and the overall prospectus look even more high quality. Headings are also used throughout the prospectus to catch the eye of the reader. Headings such as "...The right to succeed..." and also "...Learning Beyond..." as based up in the prospectus to try and get the audience to read the paragraph written below the headings. The bullet points also used, catch the readers' eye making them want to read what is written, which then gives them more positive information on the school. I feel the prospectus is very effective because of the text techniques, rhetorical devices, presentational devices and much more. The prospectus seems to have a connotation screaming "...join our school..." although the denotation of the prospectus seems to be to market the school. The prospectus is very vivid, bright and very eye-catching whereas the language contained within the prospectus is extremely persuading. All this along with high quality images I don't see how the prospectus could fail its' purpose and is therefore effective in my point of view. David Pollard English coursework Mr Eyre ...read more.