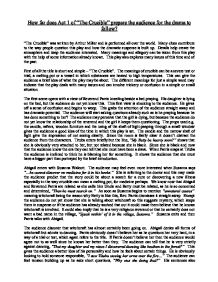 How far does Act 1 of &quot;The Crucible&quot; prepare the audience for the drama to follow?

How far does Act 1 of "The Crucible" prepare the audience for the drama to follow? "The Crucible" was written by Arthur Miller and is performed all over the world. Many clues contribute to the way people question this play and how the dramatic suspense is built up. Details help create the atmosphere and keep the audience interested. Many meanings and allegory can be taken from this play with the help of some information already known. This play also explores many issues of this time and of the past. First of all the title is short and simple - "The Crucible". The meanings of crucible can be a severe test or trial, a melting pot or a vessel in which substances are heated to high temperatures. This can give the audience a brief idea of what the play may be about. The different meanings for just a simple word may indicate that the play deals with many issues and can involve trickery or confusion in a simple or small situation. The first scene opens with a view of Reverend Parris kneeling beside a bed praying. His daughter is lying on the bed, but the audience do not yet know this. This first view is shocking to the audience. He gives off a sense of confusion and begins to weep. This grabs the attention of the audience straight away and has dramatic potential. The audience will start asking questions already such as is he praying because he has done something to her? The audience may perceive that the girl is dying, but because the audience do not yet know the relationship of the reverend and the girl it keeps them questioning. The props used e.g. the candle, rafters, wooden furniture and the using of the shaft of light peeping through a small window gives the audience a good idea of the time in which this play is set. ...read more.

the foolish Giles Corey against the wise Rebecca. They are quick to jump to conclusions. For example when Betty screams as the Psalm is being sung, Ann Putnam says it is because she cannot bear to hear the Lord's name. This shows the audience that many are looking for an easy excuse and that they are na�ve. Already the audience can feel a dramatic climax approaching, as things get tenser. Hale enters with a feeling of authority and seems experienced as he lays down many heavy books, "...they are weighted with authority." He questions the group, which again gives the impression of a trial or test taking place (referring to the title). The questioning summarises what has gone on in the play so far: Hale - "You permit dancing?" Parris - "No-no, it were secret." Abigail will do anything to get shift blame from her by blaming an easy target, the slave-girl. When they begin naming names it is a very good point to leave that act. It keeps the audience engrossed in the story, as do the other dramatic climaxes e.g. when Abigail hits Betty or when Abigail begins to plead with Proctor. The climaxes tend to get more and more dramatic throughout this act, which gives the audience a feeling that the play will get more and more dramatic. Most of the audience's predictions are correct. They are right in a way that the story could be finding a cure, but the cure is for witchcraft and the cure is to hang people. However they are wrong in believing that Rev. Parris is a main character because as the play unfolds you realise that Abigail and John Proctor and his wife become the focus. John Proctor becomes the hero of the story. He does a very moral deed, which is very touching to the audience, Danforth - " ...You will give me your honest confession in my hand, or I cannot keep you from the rope. Which way do you go Mister? ...read more.

The justice issues with the play show the true fact that at the time you were doomed from the start if you were accused time. Arthur Miller did not only write "The Crucible" to entertain and educate us, but it also represented what was happening to him at the time. He had lived during what we could call a witch-hunt, also known as the McCarthy era. In the 1940s and 1950s America became obsessed with the fear of Communism. The government wanted to stop it, as they believed it would destroy the American way of life. People were put on trial about their beliefs and black listed just as the people of Salem experienced. Arthur Miller was also put on trial. You can compare him to John Proctor as he refuses to name names. John Proctor is a main character so it could be a reflection of how Arthur Miller perceives himself. This is probably why John Proctor is such a believable character. It also educates you in the way history has changed. Miller reminds you that it doesn't necessarily end in death as it did in the times the "The Crucible" is set. Many people must connect with this play if they have just gone through a time such as the two mentioned or where one is just about to begin. Arthur Miller's own saga goes through the same issues as "The Crucible" which is why it is so believable because he has experienced all the feelings for himself. It covers a variety of emotions, themes and issues which all keep it exciting and convincing for the audience. It has deeper meanings than portrayed and educates you in an inspiring way. It is no wonder that such a deep play has been so of witchery. There was no fair way you could prove yourself, as "The Crucible" shows. All the themes of this play: blame, reputation, personal freedom, morality, hysteria, confusion, injustice, fear, beliefs, deceit show exactly all the themes of that era. People began to look for so much hope in the Bible as they were so insecure at the successful. ...read more.