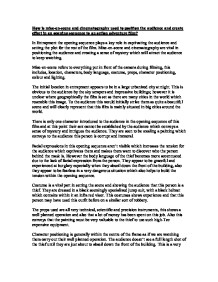 How is mise-en-scene and cinematography used to position the audience and create effect in an opening sequence to an action adventure film? In Entrapment the opening sequence plays a key role in captivating the audience and setting the plot for the rest of the film. Mise-en-scene and cinematography are vital in positioning the audience and creating a sense of mystery which will attract the audience to keep watching. Mise-en-scene refers to everything put in front of the camera during filming, this includes, location, characters, body language, costume, props, character positioning, colour and lighting. The initial location in entrapment appears to be in a large urbanized city at night. This is obvious to the audience by the sky scrapers and impressive buildings; however it is unclear where geographically the film is set as there are many cities in the world which resemble this image. To the audience this would initially strike them as quite a beautiful scene and will clearly represent that this film is mainly situated in big cities around the world. ...read more.

This is a very impressive shot as it allows the audience to capture their first glimpse of the thief whose hands they audience had seen setting up the equipment needed to carry out this operation. As this opening scene occurs in the dark the majority of colours seen by the audience are black and the yellow glows of lights from buildings and street lights. However the equipment has a silvery look to it which conveys technological intellect and expense. The colour red is used on the computer screen, on the screens of the equipment the person used and also on their helmet which is very contrasting to the dark subdued colours surrounding them which makes the numbers on the screens and the thief's visor stand out very prominently. The most vital part of mise-en-scene in this film is the lighting. High key lighting is used throughout which produces large sharp shadows. This is obviously apparent and affective at creating atmosphere when the thief is walking through the room and the shadows from her feet are shown on the floor. ...read more.

this shot through the thief's night vision mask and the colours dramatically change from black and grey to a distinct tone of green which helps to differentiate from the subjective and objective shots. Finally framing and camerawork also plays an important part of engrossing the audience with the action that's happening on screen. Extreme Close ups are used on all of the thief's equipment, these occur generally when the thief is physically using the equipment for example when the thief is seen to unscrew the bolts for the windows. These shots are also used on certain parts of their body this evokes tension because we as an audience do not yet know who the perpetrator of this crime is. An establishing shot is used at the very start of the opening sequence of a city scape at night, this is a birds eye view shot which pans through many different buildings, a re-establishing extreme long shot is also used when you see the thief standing on the roof top of the building as this reinforces to the audience that the thief is performing their crime in the city they have just seen. ...read more.