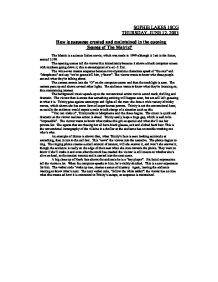 How is suspense created and maintained in the opening scenes of The Matrix?

SOPHIE LAKES 10CG THURSDAY, JUNE 12, 2003 How is suspense created and maintained in the opening Scenes of The Matrix? The Matrix is a science fiction movie, which was made in 1999 although it I set in the future, around 2199. The opening scenes tell the viewer this immediately because it shows a black computer screen with numbers going down it, this is stereotypical of a sci-fi film. The voice-over creates suspense because two mysterious characters speak of "the one" and "Morpheous" and say "we're gonna kill him, y'know". The viewer wants to know who these people are and what they're talking about. The camera zooms into the "O" on the computer screen and then the torchlight is seen. ...read more.

Trinity is not the conventional hero, as usually the audience would expect a male to talk charge of a situation such as this. "You can make it", Trinity talks to Morpheous and the chase begins. The music is quick and dramatic so the viewer realizes action is ahead. Trinity easily leaps a huge gap, which is said to be "impossible". The viewer wants to know what makes this girl so special and what she'll use her powers for. The agents that are chasing her all have black glasses, suit and slicked back hair. This is the conventional iconography of the villains in a thriller so the audience has no trouble working out who's who. ...read more.

They want to know if she'll make it and even after the truck has crashed the viewer is still unsure to whether she's alive or dead, so the tension mounts and is carried into the next scene. A big close up of Neo's face shows the audience he is a "key player". His facial expressions tell the viewer a lot. When his computer speaks to him, he's visibly shocked. This is a new experience for him. The verbal code "wake up neo, creates a sense of mystery. Again, leaving the audience wanting to know what's next. The next verbal code, "follow the white rabbit": the viewer has no idea what this means ad how it is connected to Trinity's escape, so suspense is maintained. ...read more.