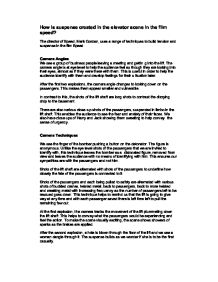 How is suspense created in the elevator scene in the film speed?

How is suspense created in the elevator scene in the film speed? The director of Speed, Mark Gordan, uses a range of techniques to build tension and suspense in the film Speed. Camera Angles We see a group of business people leaving a meeting and getting into the lift. The camera angle is at eye level to help the audience feel as though they are looking into their eyes, almost as if they were there with them. This is useful in order to help the audience identify with them and develop feelings for their situation later. After the first two explosions, the camera angle changes to looking down on the passengers. This makes them appear smaller and vulnerable. In contrast to this, the shots of the lift shaft are long shots to contrast the dizzying drop to the basement. There are also various close-up shots of the passengers, suspended in limbo in the lift shaft. This enables the audience to see the fear and anxiety of their faces. We also have close ups of Harry and Jack showing them sweating to help convey the sense of urgency. ...read more.

The use of shadows and orange lighting help to suggest danger and develop a sense of danger. After the second explosion, the lighting dims yet again and the orange hue becomes fiercer. Again suggesting that the danger has increased. This helps the audience to feel the tension. The lift shaft is dark and shadowy and becomes darker with each explosion to create a deeper sense of something ominous and dark. Sound and dialogue The arrival of the cops is heralded by screaming sirens and screeching brakes, squealing tyres, etc. This tells the audience that they are responding to an emergency. The police commander, Mack, barks instructions at the cops. His words are fast and staccato. This indicates that time is important and they must move quickly. There is no time for discussion. He tells them that there are 13 passengers. Thirteen has long been considered an unlucky number and helps to hint that this may be an unlucky group. He tells the cops that they have 23 minutes to rescue the passengers and the lift is stuck on floor 30. The cops run up the stairs counting floors as they go the keep the audience engaged with the activity. ...read more.

This scene is punctuated with frequent reminders about the impending collapse of the lift support - the crane has buckled and worked loose from its moorings. It is now precariously wedged. Harry is shouting to her to give him her hand. The tension is conveyed from the tone of his voice and the urgency of his delivery. The audience wonders if she will be brave and wills her to move. Eventually, she takes his hand and is pulled to safety - just in time. She is no sooner pulled to safety when the lift collapses with a huge crash and aftershock to remind the audience just how serious the crash was. Heroes and Villains The plot exploits the usual pitting of evil against good with the good guys winning. In Speed, we see the villain as the bomber holding hostages to ransom and putting a price on people's lives. Then we see Harry and Jack. They take risks to save the lives of others and thwart the plans of the villain. All the elements used in the film help to create the mood and atmosphere of the film, in this case, tension and suspense. The techniques show that manipulating these elements help to engage the audience and convey the moods and feelings appropriate to the film. ...read more.