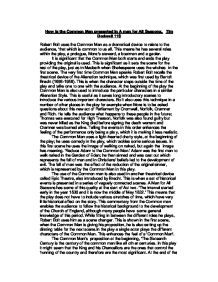 How is the Common Man presented in A man for All Seasons?

How is the Common Man presented in A man for All Seasons. Tim Dodwell 11S Robert Bolt uses the Common Man as a dramatical device to relate to the audience, 'that which is common to us all. This means he has several roles within the play, a prologue, More's steward, a boatman and a gaoler. It is significant that the Common Man both starts and ends the play providing the original is used. This is significant as it sets the scene for the rest of the play, just as in Macbeth when Shakespeare uses the witches in the first scene. The very first time Common Man speaks Robert Bolt recalls the theatrical device of the Alienation technique, which was first used by Bertolt Brecht (1898-1956). This is when the character steps outside the time of the play and talks one to one with the audience. At the beginning of the play the Common Man is also used to introduce the particular characters in a similar Alienation Style. This is useful as it saves long introductory scenes to introduce the various important characters. ...read more.

This means that the play does not have to include various stretches of time, which have very little historical affect on the story. This commentary from the Common man enables the audience to follow the historical background to the development of the Church of England, although many people have some general knowledge of this period. While fitting in between the different roles he plays, Robert Bolt uses him as a scene changer. This is shown in the first scene, when the Common Man is giving his proposition, he is also setting up the dinning table for the next scene.In the play a single actor plays the different characters of the Common Man. This enhances the feel of a 'Common Man'. The Common Man's proposition at the beginning, 'The Sixteenth Century is the century of the common man like all other centuries. In this play it might seem that the King and his Chancellors are the ones that control the 'running of the country and therefore are the most significant. ...read more.

His importance was emphasised when he was missed out of the film, which made the action seem more realistic, focusing on the historical background rather than the message about self that Bolt tried to put across. Robert Bolt does not try and create a historical play, although most of the historical details are correct. He does not make the play seem realistic to the audience, when they are constantly reminded by Bolt's use of the Alienation technique. The main idea of the play is to show the importance of standing up for what you believe in, shown by the strong will of Sir Thomas More to oppose the Act of Parliament, which might have seemed rather petty to most people. This enables Bolt to not make the play particularly realistic in parts but still gets his meaning and message across clearly. The Common Man is not vital within the story line, which is shown when he is left out of the film, but I feel he does help to explain the different situations. He becomes most useful as a character when the play is performed on stage as he has so many small but important roles. ...read more.