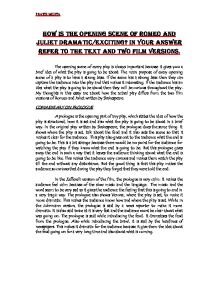 How Is the Opening Scene of Romeoand Juliet Dramatic/Exciting? In Your Answer Refer To the Text and Two Film Versions.

HOW IS THE OPENING SCENE OF ROMEO AND JULIET DRAMATIC/EXCITING? IN YOUR ANSWER REFER TO THE TEXT AND TWO FILM VERSIONS. The opening scene of every play is always important because it gives you a brief idea of what the play is going to be about. The main purpose of every opening scene of a play is to have a strong base. If the scene has a strong base then they can capture the audience into the play and that makes it interesting. If the audience has an idea what the play is going to be about then they will be curious throughout the play. My thoughts in this essay are about how the actual play differs from the two film versions of Romeo and Juliet written by Shakespeare. COMMENTARY ON PROLOGUE A prologue is the opening part of any play, which states the idea of how the play is structured, how it is set and also what the play is going to be about in a brief way. In the original play written by Shakespeare, the prologue does the same thing. It shows where the play is set, talk about the feud and it also sets the scene so that it makes it clear for the audience. This play also gives out to the audience what the end is going to be. ...read more.

The brawl in the Zefferelli version of the film starts with a bit of normal insulting and then goes straight to the fight. There is also the same opposite as in the text version of Benvolio being a peace keeper and Tybalt being shown evil. To make it more dramatic, the director makes Old Montague more sympathetic than Old Capulet to the audience because Old Montague runs into the fight because he sees one of his men wounded, while Old Capulet goes into the fight for no reason. One more reason used by the director to make it dramatic is that the Old Montague and Old Capulet have longer swords than their men because they have the higher authority. In the Luhrmann version of the film, the brawl is very dramatic. The Capulet's entry is very dramatic and especially Tybalt's. The Capulets are shown wearing dark clothes by the director to make them look baddies to the audience. The Montagues are shown wearing very bright and Hawaiian clothes to make them look as goodies to the audience. To make it even more dramatic, the director has made the Capulets shown stronger to the audience by making them look stronger than the Montagues by their actions and clothes along with some special effects. By all this special effects and dramatic effects makes this brawl to be shown as a rival gang wars to the audience. ...read more.

There is a strong contrast when Romeo is in a sad and calm mood and after he sees people wounded because of the recent brawl, he becomes suddenly angry. This is to make the audience come out of the very sad part. In the Luhrmann version of the film, Romeo is also shown very sad. Slow music is also played to calm the audience but to add to the calmness, the director sets this part of the scene near a bit of funfair and on a beach. This would probably be there to make the audience calm faster after the incident of the brawl. CONCLUSION All these reasons sum up to explain why the opening scene is very dramatic for an audience. The play starts off with a very calm and slow prologue. It does differ from different version of the play and then converted to a film, but they are still very calm. They start off giving the audience a bit of and idea of what the play is going to be about, which already grabs your attention by telling away the end in a way which leaves you curious till the end of the play. Then in a very strong contrast it goes on straight to a brawl. This really grabs the audience into the play with a sudden change of mood. Then the entrance of the Prince with a very interesting dramatic effect lead the audience through he whole play. PRATIK MEHTA ...read more.