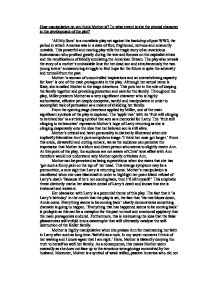 How manipulative do you think Mother is? To what extent is she the pivotal character in the development of the plot? 'All My Sons' is a moralistic play set against the backdrop of post WW2

How manipulative do you think Mother is? To what extent is she the pivotal character in the development of the plot? 'All My Sons' is a moralistic play set against the backdrop of post WW2, the period in which America was in a state of flux; frightened, nervous and eminently unstable. This powerful and moving play tells the tragic story of an avaricious businessman who profited greatly during the war and focuses on the capitalist ethics and the ramifications of blindly emulating the American Dream. The play also reveals the story of a mother's unshakable love for her dead son and simultaneously the two young lovers' endeavouring struggle to find hope for the future in spite the adversity and turmoil from the past. Mother-'a woman of uncontrolled inspirations and an overwhelming capacity for love' is one of the main protagonists in the play. Although her actual name is Kate, she is called Mother in the stage directions. This puts her in the role of keeping the family together and providing protection and care for the family. Throughout the play, Miller presents Mother as a very significant character who is highly authoritative, effusive yet deeply deceptive, tactful and manipulative in order to accomplish task of persuasion as a means of shielding her family. ...read more.

During the interlude in which Keller plays detective with Bert, Mother is uproared and immediately orders Keller to stop talking about jail-'I want you to stop that jail business.' The repetition of 'there's no jail her!' evidently illustrates how paranoid she is. Miller has included this interlude to raise suspicion in the audience's minds. From the stage direction-'She is shaken. Her speech is bitten off, extremely urgent,' the audience can recognises that she is very scared of bringing up the past. This implies that she knows the full extent of Keller's wrongdoings and therefore knows that he is guilty. Mother's vindictive, two-faced nature is reflected in the speech where she criticizes Ann by saying-'You gained a little weight.' Mother is portrayed as being extremely manipulative as she sets Ann up in Larry's room. His old room is described like a shrine as 'the shoes are all shined' and all of his clothes are 'hang up.' Mother here is portrayed as putting Larry on a pedestal. This further confirms her belief that Larry will return. Again and again, she shifts the conversation back towards Larry when the conversation approaches dangerously towards the revelation of the truth. Her incessant persuasion directed at Ann in wanting her to conjure up the old feelings towards Larry can be also expressing her manipulative and forceful nature-'You-remember him, he's still in your thoughts.' ...read more.

The powerful use of alliteration here indicates Mother is envisaging the unthinkable; Keller killing his own son. The audience sees Mother's vulnerability when she says solemnly-'We're dumb, Chris. Dad and I are stupid people.' This implies that Keller and mother alike are na�ve and cowardly as they escape from their problems rather than dealing with them directly. At the end of the play, Mother declares-'Forget now. Live.' This simple, ambivalent and dramatic sentence acts as a release for Ann and Chris as the death of Keller enables them to start afresh and provides hope for their future. This gives Mother huge authority over Ann and Chris as she allows them to start a new life devoid of burdens and destructive lies. Additionally, the death of Keller represents America eventually taking part in the War effort and contributing to WW2 by helping the Allies to fight the Germans. In portraying Mother's obstinate denial, Miller is bringing across the message that she and America alike have to share moral responsibility for the crimes that they have committed and that they need to act morally and truthfully in order to rid of the corruption of the American society. All in all, Miller has created an extremely manipulative woman in the form of Mother, who is crucial and central in the development of the plot of the play. ?? ?? ?? ?? ...read more.