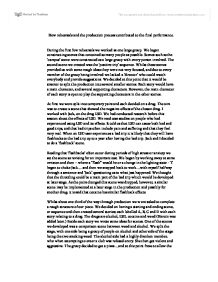 How rehearsals and the production process contributed to the final performance.

How rehearsals and the production process contributed to the final performance. During the first few rehearsals we worked as one large group. We began constructing scenes that contained as many people as possible. Scenes such as the 'campus' scene were constructed as a large group with every person involved. The second scene we created was the 'positive trip' sequence. Whilst these scenes provided us with some rough ideas they were not very focused, and due to every member of the group being involved we lacked a 'director' who could watch everybody and provide suggestions. We decided at this point that it would be smarter to split the production into several smaller stories. Each story would have a main character, and several supporting characters. However, the main character of each story is open to play the supporting characters in the other stories. At first we were split into temporary pairs and each decided on a drug. The aim was to create a scene that showed the negative effects of the chosen drug. ...read more.

The drugs are alcohol, LSD, cocaine and weed (Heroin was added later.) Inside each story we wrote some ideas for scenes. One of the scenes we developed was a comparison scene between weed and alcohol. We split the stage, with one side being a group of people on alcohol and other side of the stage being the two smoking weed. The alcohol side had a highly drunken member, who when attempting to enter a club was refused entry. She then got violent and aggressive. The group decided to get a pizza...and at this point froze to allow the weed smokers to be heard. The weed smokers were show as being friendly and calm which was a stark contrast to the loud and brash alcohol drinkers. They decided to go to the pizzeria where they met the alcohol drinkers. There was a short scene before words such as "stoners" and "piss heads" were thrown at the opposing group. This caused the alcohol drinkers to get much more violent and angry. ...read more.

During the later stage of the production process we as a class did a session focusing on creating atmospheres. This session, lead by the teacher, involved creating a haunted house. Our aim was to 'frighten' the teacher by creating a 'scary' atmosphere through the use of mime, and to create a soundscape. Each of us quickly formed a part of the house and decided on an action and sound. This showed us how effective soundscapes can be at establishing a place, or mood. We decided to implement a soundscape into the 'LSD trip'. We had several 'bodies' surrounding Ellie (the LSD user) and began to build up the soundscape. One by one each person began their own sound...it was a short sound that was repeated for example 'Help us' or a sinister-sounding laugh. Once each piece had joined the sound was increased. It got louder and louder until the 'breaking point' at which she screams 'Leave me alone'. This caused the soundscape to end abruptly. The effect produced was a very sinister and spooky one, perfect for the scene. ...read more.