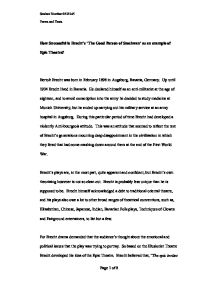 How Successful is Brecht's 'The Good Person of Szechwan' as an example of Epic Theatre?

How Successful is Brecht's 'The Good Person of Szechwan' as an example of Epic Theatre? Bertolt Brecht was born in February 1898 in Augsburg, Bavaria, Germany. Up until 1924 Brecht lived in Bavaria. He declared himself as an anti-militarist at the age of eighteen, and to avoid conscription into the army he decided to study medicine at Munich University, but he ended up carrying out his military service at an army hospital in Augsburg. During this particular period of time Brecht had developed a violently Anti-bourgeois attitude. This was an attitude that seemed to reflect the rest of Brecht's generations mounting deep disappointment in the civilization in which they lived that had come crashing down around them at the end of the First World War. Brecht's plays are, in the most part, quite apparent and confident, but Brecht's own theorizing however is not so clear-cut. Brecht is probably less unique than he is supposed to be. Brecht himself acknowledged a debt to traditional oriental theatre, and his plays also owe a lot to other broad ranges of theatrical conventions, such as, Elizabethan, Chinese, Japanese, Indian, Bavarian Folk-plays, Techniques of Clowns and Fairground entertainers, to list but a few. For Brecht drama demanded that the audience's thought about the emotional and political issues that the play was trying to portray. So based on the Illusionist Theatre Brecht developed his idea of the Epic Theatre. Brecht believed that, "The epic invites calm, detached contemplation and judgement; the dramatic overwhelms reason with passion and emotion, the spectator sharing the actor's experiences" (www.Shunsley.eril.net/armoore/drama/brecht.htm#8). ...read more.

My job is tedious. When water is short I have to go far for it. And when it is plentiful I earn nothing." (The Good Person of Szechwan, Bertolt Brecht, pp3, 2000). It is clear from this quote to establish that Wang the Water-Seller is the narrator of the play, by the way he addresses the audience directly. In this particular quote, which is taken from the Prologue, it feels as though the reader has just met the character personally and they are introducing themselves and the story. Although the narrator's direct addressing to the audience adds to Brecht's intention of the Alienation Effect, it isn't only the narrator of the play that is able to do this. "SHEN TEH: My beautiful shop! Oh, such hopes! No sooner opened, than it is no more. To the audience: The dinghy, which might save us Is straightway sucked into the depths: Too many of the drowning Snatch greedily at it." (The Good Person of Szechwan, Bertolt Brecht, pp20, 2000). Brecht emphasises the Alienation Effect by having other characters directly addressing the audience, which constantly reminds the audience that they are just spectators of a play. The way Shen Teh delivers the last four lines of the above quote seems to drive home an important political or emotional message, another way that Brecht does this is through the use of songs. The songs in a play were also an important factor in establishing the Alienation Effect, and some of the songs from Brecht's plays have become quite popular. ...read more.

Teh there is no closure as she is still left with all her problems of the poor immoral people of Szechwan sponging off of her, and also the problem of how to tell them that her cousin is really her, and that she isn't really as good as every body thinks she is. This is reflected by Brecht in the Epilogue, where an actor stands in front of the closed curtain and addresses the audience directly, "Ladies and Gentlemen, don't feel let down: We know this ending makes some people frown. We had in mind a sort of golden myth Then found the finish had been tampered with. Indeed it is a curious way of coping: To close the play, leaving the issue open...There's only one solution that we know: That you should now consider as you go What sort of measures you would recommend To help good people to a happy end." (The Good Person of Szechwan, Bertolt Brecht, pp109, 2000). To conclude I think that Brecht's ideas of the Epic Theatre are very well portrayed in his play 'The Good Person of Szechwan', and his use of the Alienation Effect within this play really gets the reader or audience thinking about the political and moral issues that the Playwright is trying to portray. I feel that 'The good Person of Szechwan' is extremely successful as an example of Epic Theatre, because of the way that Brecht brings together all of the examples of what makes Epic Theatre and the Alienation Effect to produce this play. ...read more.