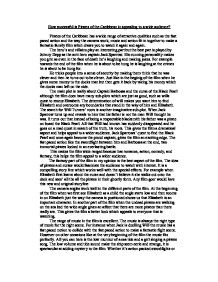 How successful is Pirates of the Caribbean in appealing to a wide audience?

How successful is Pirates of the Caribbean in appealing to a wide audience? Pirates of the Caribbean has a wide range of attractive qualities such as the fast paced action and the way the camera work, music and action fit in together to make a fantastic family film witch draws you to watch it again and again. The hero's and villains play an interesting part but the best part is played by Johnny Depp as the anti-hero captain Jack Sparrow. His cunning personality makes you grin as even in the face of death he's laughing and making jokes. For example towards the end of the film when he is about to be hung he is laughing at the crimes he is about to be hung for. He tricks people into a sense of security by making them think that he was clever and then he turns out to be clever. Just like in the beginig of the film when he gives some money to the docks man but then gets it back by taking his money which the docks man left on the side. ...read more.

The fast paced action like the swordfight between him and Barbossa at the end, two immortal pirates locked in an everlasting battle. This makes the film wide ranged because has romance, action, comedy, and fantasy, this helps the film appeal to a wider audience. The fantasy part of the film in my opinion is the best aspect of the film. The idea of pirates and curses would fascinate the audience to watch with interest. It is a compelling story line which works well with the special effects. For example when Elizabeth first learns about the curse and doesn't believe it she walks out onto the deck and sees' all the all the pirates in their ghostly form. Any film goer would love this new and original storyline The camera angles work well in the different parts of the film. At the beginning of the film when we first see Elizabeth as a child the angle starts low and then zooms in on Elizabeth just the way the camera is positioned shows us that Elizabeth is an important character. ...read more.

There is a lot of comedy in this film, which is quite surprising considering it's gloomy main plot. The amount of humour in this film cheers it up which help the film appeal to a wider audience a great deal. The standing joke's are brilliant such as "parley" when it starts it is something Elizabeth uses to save herself but later on becomes a joke which really annoys the pirates. The majority of the humour is provided by Jack Sparrow's wit as he could make a joke out of any situation. For example at the beginning of the film when Jack Sparrow is captured Lieutenant Norrington says, "You must be the worst pirate I have ever heard of." To which Jack reply's " But you have heard of me." The blurb describes the film perfectly, it tells us about the story but doesn't give away too much of the plot but tells us it an excellent film. This helps it appeal to a wider audience. To conclude I would say that this film is a family thriller, action packed, funny and horrific. A little bit of everything which means it appeals to a huge audience. ...read more.