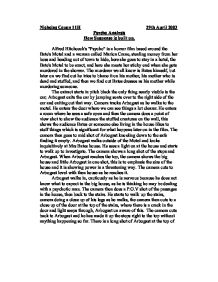 How Suspense is built up.

Nicholas Coxon 11H 29th April 2003 Psycho Analysis How Suspense is built up. Alfred Hitchcock's "Psycho" is a horror film based around the Bate's Motel and a woman called Marion Crane, stealing money from her boss and heading out of town to hide, here she goes to stay in a hotel, the Bate's Motel to be exact, and here she meets her sticky end when she gets murdered in the shower. The murderer we all know is Bates himself, but later on we find out he tries to blame it on his mother, his mother who is dead and stuffed, and then we find out Bates dresses as his mother while murdering someone. The extract starts in pitch black the only thing nearly visible is the car; Arbogast exits the car by jumping seats over to the right side of the car and exiting out that way. ...read more.

The camera cuts to Arbogast level with then house as he reaches it. Arbogast walks in, cautiously as he is nervous because he does not know what to expect in the big house, as he is thinking he may be dealing with a psychotic man. The camera then does a P.O.V shot of the passages in the house, then back to the stairs. He starts to walk up the stairs, camera doing a close up of his legs as he walks, the camera then cuts to a close up of the door at the top of the stairs, where there is a crack in the door and light seeps through, Arbogast un aware of this. The camera cuts back to Arbogast and he has made it up the steps right to the top without anything happening so far. There is a long shot of Arbogast at the top of the stairs and this is when you see a figure run from the door with ...read more.

extract, to low notes, for instance, when he exits the motel and looks at the house, low notes begin to play, giving the audience the impression that the house is the place where it all happens. As Arbogast walks up the forbidden steps of the Bates' house, there is a long note being played, this again gives the sign of danger. As Bates runs out of the room the audience suddenly gets blasted with high pitched notes, this is effective as it is meant to scare everyone, as it does, and make the audience gasp thinking what will come next. The high violins continue as Arbogast falls down the stairs. When he reaches the bottom, Bates stabs him; the violins beat hits when the knife is raised given an effect of pain and anguish. This kind of effect would be used most often in silent movies when there is a stabbing scene to dramatise the killing and here it is used just as brilliantly. ...read more.