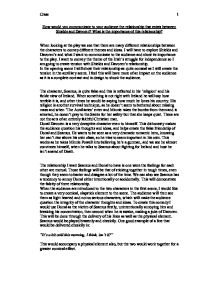 How would you communicate to your audience the relationship that exists between Shields and Davoren? What is the importance of this relationship?

How would you communicate to your audience the relationship that exists between Shields and Davoren? What is the importance of this relationship? When looking at the play we see that there are many different relationships between the characters to convey different themes and ideas. I will have to explore Shields and Davoren's and what I want to communicate to the audience and show its importance to the play. I want to convey the theme of the Irish's struggle for independence so I am going to create tension with Shields and Davoren's relationship. In the opening scene I will show their relationship as quite comical as I will create the tension in the auxiliary scene. I feel this will have more of an impact on the audience as it is a complete contrast and is design to shock the audience. ...read more.

He wants to be seen as a very dramatic romantic hero, knowing her can't rise above his own class, so he tries to seem important in his own. This works as he takes Minnie Powell into believing he's a gunman, and we see he almost convinces himself, when he talks to Seamus about fighting for Ireland and how he isn't scared of Death. The relationship I want Seamus and Donal to have is one were the feelings for each other are mutual. Those feelings will be that of sticking together in tough times, even though they seem to banter and disagree a lot of the time. We can also see Seamus has a tendency to annoy Donal either intentionally or accidentally. This will demonstrate the falsity of there relationship. ...read more.

Seamus will also show his selfish and self importance nature in this scene, in particularly when he has just woken up. His lines: "...The way these oul' ones bawl at the body...they'd throw a bomb at you." Seamus would deliver this line infuriated as though he had just been the innocent victim in and ordeal. This adds to the greater annoyance of Donal and creates a comic effect to the audience as they know he has been called for a while. I would hope the audience would be shocked at the drastic change in characters, and although they wouldn't question the veracity of Donal and Seamus at the beginning of the play, their attitudes in the final scenes would make the audience think back, and engage with the play by figuring out characters. I feel this would keep the audience entertained in a sense it makes them think, and look at how they interacted with other characters. Crass 1 ...read more.