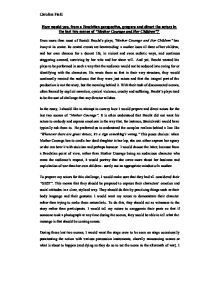 How would you, from a Brechtian perspective, prepare and direct the actors in the last two scenes of &quot;Mother Courage and Her Children&quot;?

How would you, from a Brechtian perspective, prepare and direct the actors in the last two scenes of “Mother Courage and Her Children”?

Even more than most of Bertolt Brecht’s plays, “Mother Courage and Her Children” has irony at its centre. Its central events are heartrending: a mother loses all three of her children, and her own chances for a decent life, in violent and even sadistic ways, and continues staggering onward, surviving by her wits and her sheer will.  And yet, Brecht wanted his plays to be performed in such a way that the audience would not be seduced into caring for or identifying with the characters. He wrote them so that in their very structure, they would continually remind the audience that they were just actors and that the integral part of the production is not the story, but the meaning behind it. With their rush of disconnected scenes, often framed by explicit narration, cynical violence, cruelty and suffering, Brecht’s plays tend to be the sort of challenge that any director relishes.

In the essay, I should like to attempt to convey how I would prepare and direct actors for the last two scenes of “Mother Courage”. It is often understood that Brecht did not want his actors to embody and express emotions in the way that, for instance, Stanislavski would have typically ask them to.  He preferred us to understand the complex realism behind a line like “Whenever there are great virtues, it's a sign something's wrong.” This poses choices: when Mother Courage has to cradle her dead daughter in her lap, she can either express her agony or she can bear it with stoicism and perhaps humour.  I would choose the latter, because from a Brechtian point of view, rather than Mother Courage being an audacious character who earns the audience’s respect, it would portray that she cares more about her business and exploitation of war than her own children - surely not an appropriate mindset of a mother.

To prepare my actors for this challenge, I would make sure that they had all considered their “GEST”. This means that they should be prepared to express their characters’ emotion and social attitudes in a clear, stylised way. They should do this by practicing things such as their body language and their gestures. I would want my actors to demonstrate their character rather than trying to make them naturalistic. To do this, they should act as witnesses to the story rather than participants. I would tell my actors to exaggerate their parts so that if someone took a photograph at any time during the scenes, they would be able to tell what the message is that should be coming across.

During these last two scenes, I would want the stage crew to be seen on stage occasionally punctuating the action with various percussion instruments, chorally announcing scenes or what is about to happen (and dying as they do so to set the scene as the aftermath of war). I think that this would attempt to break the illusion of a “fourth wall”. This means that straight away, the audience would be reminded that it is just a play, and they are just actors.

I would make sure that the Lieutenant’s character is played robotically. The actor should do this by mindlessly marching onto the stage and speaking in a very monotone voice throughout, even when there is true action going on around him. I believe that this would convey that the Lieutenant has been robbed of his passion and soul because of war. He is no longer a real person - just a clone, a pawn in a play about the corrupt effects of war.

The three soldiers that are following him should drunkenly stagger onto the stage, pushing each other over and laughing with one another. They should now and again mimic the Lieutenant’s walk and act sarcastically towards him. This idea is to portray that the soldiers have no respect for their superiors.

When the soldiers knock at the farmhouse door and the old peasant woman enters the stage, one of the soldiers should clap his hand over her mouth so to stop her screaming. The remaining soldiers should jeer at the sight of the feeble woman squirming with fear. A soldier should then throw the old peasant and his son onto the stage with aggression. A spotlight should appear at Kattrin crouching in the wagon, and as the Lieutenant says, “There’s one,” a soldier should pull her out and push her onto the stage floor. The peasants should alternate their lines with panicked expressions - eyebrows raised, arms flailing, and they should speak very quickly so to convey their alarm at the goings on. This should make it very obvious to the audience what is happening and the messages behind the plot.

As the frightened young peasant blurts the fact that he “don’t know any path”, the soldiers should mock him, repeating what he says in high pitched voices and mimicking his pained expression and as the second soldier bargains with the young boy, it should be evident to the audience that the actors are joking with him cruelly by the fact that the soldiers are grinning to one another. The levels in this scene, with the boy lower down and the soldiers walking around confidently with their shoulders pushed back and their wide strides should illustrate the status between the poor innocent child and the corrupt “heroes of war”. The Lieutenant and the three soldiers should continue acting their parts in arrogant, stylised ways, whilst the peasants try to bargain and finally give in.

When the soldiers leave the stage, led by the terrified young peasant, the three remaining peasants should try to justify the fact that they are not helping the rest of the village. I think that to make this evident to the audience, the actors should say their lines very calmly and thoughtfully:

The peasant woman should then force the others to kneel and pray. She should say the prayer hurriedly and stutter now and again, so to get the slight guilt that she may have out of the way. I think that this would reveal to the audience that the characters had a choice whether to help the others in the village or to keep themselves safe. They choose the latter, the more selfish choice, and it should be evident that even these supposedly innocent characters in the play, are corrupt.

Kattrin should groan regularly in frustration and finally, as she creeps off to the wagon, climbs up the ladder onto the roof and starts beating the drum with such extreme determination, the peasants should abruptly stop praying and run into action. As the characters have talked themselves into thinking that they are doing the right thing, their reaction is even more frantic than before. Even this scene should be missing the kind of frantic, air-raid-siren intensity that it potentially holds, as Kattrin continues to beat the drum while the soldiers, themselves now panicked, try to stop her, to keep her from waking the village. Kattrin’s role should seem more stolid and deliberate than desperate and driven by adrenaline. This should really be the only part in the whole play where I would like the audience to feel something more than morality being thrown at them. I would like them to feel for Kattrin, whether it is frustration or admiration. The soldiers should seem to have all the time in the world to shoot her from her perch, just too late to prevent her from raising the alarm. They should be even more aggressive now, shouting at the dumb girl as she carries on drumming. I would ask the stage crew, still sitting on stage, to join in with drumming steady beat, so to again remind the audience that although this scene is full of passion, that is all it is, a scene in a play.

As the soldiers start to chop wood manically, Kattrin becomes more and more upset, the actor showing this with tears in her eyes and peering around aimlessly, she carries on the steady drumming. To make it obvious that the girl is listening to the Lieutenant and his soldiers plotting something, she should put her hand to her ear and strain her expression. When she realizes that her drumming has worked, the actor should stop the beat, smile, continue drumming again and laugh manically. The actors playing the soldiers should be outraged at this, making it obvious that the roles in status have evidently been reversed.

The scene should go on with quick pace, with the young peasant hitting the wagon with a board, the peasant woman screaming at Kattrin and her crying and distressed noises and expressions. Finally, the soldiers fire their guns and after a few more feeble beats, Kattrin should collapse, dead. Muffled noises of canons, gunfire and alarm bells should be heard so to remind the audience of the aftermath of war.

The next morning, Mother Courage sits by the dead body of her daughter, ignoring the peasants words, denying the fact that Kattrin is dead: “Maybe she’s fallen asleep” and singing to her. As she is singing, I would like the actor to pick Kattrin up and cradle her in her arms, stroking her hair. When the fact that Kattrin is dead finally dawns on Mother Courage: “She’s not asleep… she’s gone, you must get away”, with no hesitation, she should drop her dead daughter back onto the floor and cover her up with a cloth.

She should speak to the peasants as though Kattrin was useless and swiftly pay the peasants for the “proper burial” without a second though. As Mother Courage harnesses herself back into her wagon, I would like for the audience to hear background noise depicting war. She glares back at her dead daughter as she complains to herself: “I hope I can pull the wagon by myself”, and with just one look back, the actor should run after a regiment screaming “Hey! Take me with you!” To end the play, the audience should hear the soldiers singing monotonously:

“Dangers, surprises, devastations - / The war takes hold and will not quit. / But though it lasts three generations / We shall get nothing out of it. / Starvation, filth, and cold enslave us. / The army robs us of our pay, / Only a miracle can save us / And miracles have had their day. / Christians, awake! The winter’s gone! / The snows depart. The dead sleep on. / And though you may not long survive / Get out of bed and look alive!”