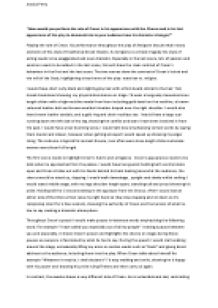 How would you perform the role of Creon in his first appearance with the Chorus and in his last appearance of the play to demonstrate to your audience how his character changes?

﻿Jessica Perry ?How would you perform the role of Creon in his appearance with the Chorus and in his last appearance of the play to demonstrate to your audience how his character changes?? Playing the role of Creon, his performance throughout the play of Antigone should retain many elements of the style of traditional Greek theatre. As Antigone is a Greek tragedy the style of acting needs to be exaggerated and over-dramatic. Especially in the last scene, lots of passion and emotion needs to be added in the last scene, this will show the clear contrast of Creon?s behaviour in the first and the last scene. The two scenes show the contrast of Creon?s hubris and the will of the Gods, highlighting a key theme of the play: state law vs. religion. I would have short curly black and slightly grey hair with a thick beard similar to the hair. ...read more.

Throughout Creon's speech I would make pauses in-between words emphasising the following word. For example "I have called you especially out of all my people" leaving a pause between you and especially, it shows Creon's power and highlights the silence on stage during these pauses as everyone is fascinated by what he has to say. During the speech I would start walking around the stage, occasionally lifting my arms on certain words such as "Gods" and giving direct address to the audience, including them into the play. When Creon talks about himself for example "Whatever it may be, I shall declare it" I'd stop walking and smile, showing he is happy with his power and showing his pride ruling Thebes and then carry on again. In contrast, the exodus shows a very different side of Creon. He is vulnerable and sad, contrasting to his hubris at the start of the play. ...read more.

He then follows on to say "lead me away" I would hold out my hands like a beggar on the street contrasting to power and status and one guard would pick hold me up as if he's helping me to walk, another guard would pick up Haemon's body and follow. Whilst exiting I would look up then drop my head again showing the will of the Gods has overpowered Creon, a big convention of Greek Tragedy. In conclusion, the difference between the 1st episode and the exodus shows the contrast of Creon's hubris and his downfall from the will of the Gods. It shows the contrast of his arrogance and ignorance with his weakness and failure leaving him with nothing. Creon's vocal starts with a low but loud booming voice with a stern tone but changes into a weak, quiet and lifeless voice. His physical ability at the start are powerful, being upright with his feet apart showing his authority, however turns into weak, not being able to stand up and can't keep his head up. ...read more.