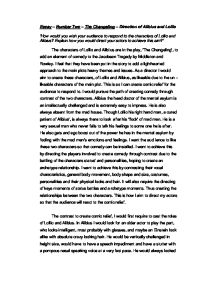 'How would you wish your audience to respond to the characters of Lollio and Alibius? Explain how you would direct your actors to achieve this aim?'

I want to achieve this by directing the players involved to create comedy through contrast due to the battling of the characters status' and personalities, hoping to create an archetype relationship. I want to achieve this by contrasting their vocal characteristics, general body movement, body shape and size, costumes, personalities and their physical looks and hair. It will also require the directing of keys moments of status battles and archetype moments. Thus creating the relationships between the two characters. This is how I aim to direct my actors so that the audience will react to the comic relief. The contrast to create comic relief, I would first require to cast the roles of Lollio and Alibius. ...read more.