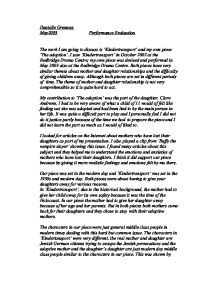 Danielle Grennan May2003 Performance Evaluation The work I am going to discuss is 'Kindertransport' and my own piece 'The adoption'. I saw 'Kindertransport' in October 2002 at the Redbridge Drama Centre; my own piece was devised and performed in May 2003 also at the Redbridge Drama Centre. Both pieces have very similar themes about mother and daughter relationships and the difficulty of giving children away. Although both pieces are set in different periods of time. The theme of mother and daughter relationship is not very comprehensible so it is quite hard to act. My contribution to 'The adoption' was the part of the daughter, Clare Andrews, I had to be very aware of what a child of 11 would of felt like finding out she was adopted and had been lied to by the main person in her life. It was quite a difficult part to play and I personally feel I did not do it justice partly because of the time we had to prepare the piece and I did not learn the part as much as I would of liked to. ...read more.

In our piece the mother had to give her daughter away because of her age and her parents. But in both pieces both mothers come back for their daughters and they chose to stay with their adoptive mothers. The characters in our piece were just general middle class people in modern times dealing with this hard but common issue. The characters in 'Kindertansport' were very different, the real mother and daughter are Jewish German citizens trying to escape the Jewish persecutions and the adoptive mother and the daughter's daughter are just modern day middle class people similar to the characters in our piece. This was shown by accents for the different nationalities. Also the character of the social worker in my own piece was very different to the other characters not being emotionally involved this was shown by an obvious difference between her intonation used and the other characters intonations. ...read more.

We used various sound effects and props like a hoover to make it more effective and realistic. From my research and performance I have learnt that it is very important to be aware of your audience and when devising a piece make it as realistic as possible. 'Kindertransport' was a very good piece and it made me realise as a member of the audience how distressing being adopted and having two mothers for a child is like, this is what I wanted to do with my piece make the audience see the importance of the issue of adoption. The research done in my group and by myself helped me act out my character better because it made me realise that adoption is a hard issue and made me perform my character with more feeling and understanding. I would have liked to have been more emotional and shown maybe a few more feelings felt by a child finding out she was adopted but I have learnt from this performance and I hope to do better in my next piece. ...read more.