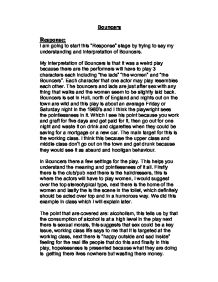 Bouncers Response: I am going to start this "Response" stage by trying to say my understanding and interpretation of Bouncers. My interpretation of Bouncers is that it was a weird play because there are the performers will have to play 3 characters each including "the lads" "the women" and "the Bouncers". Each character that one actor may play resembles each other. The bouncers and lads are just after sex with any thing that walks and the women seem to be slightly laid back. Bouncers is set in Hull, north of England and nights out on the town are wild and this play is about an average Friday or Saturday night in the 1980's and I think the playwright sees the pointlessness in it. Which I see his point because you work and graft for five days and get paid for it, then go out for one night and waste it on drink and cigarettes when they could be saving for a mortgage or a new car. The main target for this is the working class. I think this because the upper class and middle class don't go out on the town and get drunk because they would see it as absurd and hooligan behaviour. In Bouncers there a few settings for the play. This helps you understand the meaning and pointlessness of it all. Firstly there is the club/pub next there is the hairdressers, this is where the actors will have to play women, I would suggest over the top stereotypical type, next there is the home of the women and lastly the is the scene in the toilet, which definitely should be acted over top and in a humorous way. ...read more.

The themes that they will have to explore are things like exaggerated realism which basically explains itself. Exaggerated realism is acting something over the top with meaning. The characters are typed in the class; this could mean that the character is stereotyped. Like a stereotypical German man has blonde hair and little round glasses. But sometimes stereotyping someone or something is wrong because if you dress or look like something doesn't necessarily mean you are. My example of this would be some one maybe dressed like a gypsy it doesn't mean that they are. The play also has "Black Humour" is something that is funny but wouldn't be funny to the person that it has happened to. An example of this is if a person fell over a banana skin in the street you would laugh but if it happened to your Nan it wouldn't be funny because its part of your family and someone you care for. The next thing in the play is visual humour is humour that you can physically see on stage. An example of would be bottom where they hit each other with a frying pan but not actually hurting each other. So you could apply this to Bouncers by hitting someone with a pint glass in a club when they are drunk. The last acting theme would be a monologue this is a dramatic soliloquy. This is where a character will talk to him or herself revealing there a secret to the audience and this is a clue to the audience but the other characters don't know. ...read more.

When acting the play we were trying to bring out the key points of the play and that was by exsaudated realism, we did this by stereotyping. Then next thing was typing the characters and we did this by looking at the characters personality and comparing it with whoever we had in our group. We did try to add visual humour to our parts by doing something that the audience could physically see an example was when we were acting out the toilet scene and when one of the characters slipped over on the urine on the floor and get his leg wet, went up to the hand dryer to dry himself off. Overall I felt that the play was mostly well performed because when we did the workshops in the class it helps us learn a lot about:- - movement - posture - gesture - voice - confidence I chose these as the main ones because they are the ones that I felt I had improved on the most. I have gain experience on how to walk and move as a woman and didn't fell embarrassed about it because the rest of the boys had to do it as well. I can now sort of keep my voice like a woman's voice if I had to. I have learnt that if you work together and or hard it will get done and that forum theatre helped my performance because of people's useful comments. This also helped my understanding of the play. Ben Warner 11B ?? ?? ?? ?? ...read more.