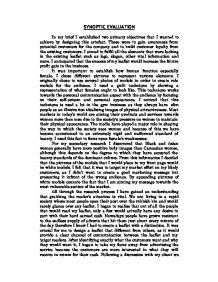 I fulfilled all the audience's needs by meeting all elements that were lacking in the existing leaflet. My main priority was to clearly display all the essential information that a customer would require from a good salon leaflet.

SYNOPTIC EVALUATION In my brief I established two primary objectives that I wanted to achieve by designing this artefact. These were to gain awareness from potential customers for the company and to build customer loyalty from the existing customers. I aimed to fulfil all the elements that were lacking in the existing leaflet such as logo, slogan, other vital information and more. I anticipated that the success of my leaflet would increase the future profit gain in the business. It was important to establish how human function especially female. I chose different pictures to represent various elements. I originally chose to use several photos of models in order to create role models for the audience. I used a guilt technique by showing a representation of what females ought to look like. This technique works towards the personal communication aspect with the audience by focusing on their self-esteem and personal appearance. I noticed that this technique is used a lot in the gym business as they always have slim people as an illustration idealising images of physical attractiveness. ...read more.

We are living in a rapid society where most people open their post over the rubbish bin and would rarely glance over any leaflet. I began to realise that out of all the people that would read my leaflet, only a few would actually have any desire to part with their hard earned cash. Nowadays people have grown resistant to the endless supply of adverts that hit them just about every minute of the day therefore I knew I had to create a leaflet with a distinction. It was crucial for me to design a leaflet that different from others, as it would provide a clear channel of communication between the leaflet and my target readers. After identifying exactly what the customers want and why they would want it, I began to take my focus away from advertising the service because the customers are more interested in what they will receive in return for their cash. Following a discussion with my client we concluded that we needed to make a special offer to which my target audience could respond to and would desire to visit the salon. ...read more.

I chose to include the picture of a scissor to build the audience's mental concept of the salon. At the beginning of the designing process I anticipated to create a symbol to represent the salon rather than a logo because of my secondary showed that a human's brain recognises images before texts. I originally designed the front page by placing several model pictures for the audience to instantly recognise the type of leaflet it is. However I discovered that it would be more effective to include real images of the salon and the work force. By including real photographs made it possible for me to visually design the type of atmosphere that I want the audience to perceive. I used the photographs to portray the nature and the hospitality of the salon. I wanted to build a level of standard where readers would feel that the salon is suitable for them and by doing so I would be providing them with a comfortable reassurance that their decision to visit the salon is the right one. I understood that different people would interpret my leaflet in different ways whether it's due to their race, age or gender therefore I designed a leaflet that would be flexible to all readers. ...read more.