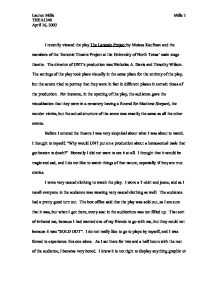 I recently viewed the play The Laramie Project by Moises Kaufman and the members of the Tectonic Theatre Project at the University of North Texas' main stage theatre. The director of UNT's production was Nicholas A. Davis and Timothy Wilson.

I recently viewed the play The Laramie Project by Moises Kaufman and the members of the Tectonic Theatre Project at the University of North Texas' main stage theatre. The director of UNT's production was Nicholas A. Davis and Timothy Wilson. The settings of the play took place visually in the same place for the entirety of the play, but the actors tried to portray that they were in fact in different places in certain times of the production. For instance, in the opening of the play, the audience gave the visualization that they were in a cemetery having a funeral for Matthew Shepard, the murder victim, but the actual structure of the scene was exactly the same as all the other scenes. Before I entered the theatre I was very skeptical about what I was about to watch. I thought to myself, "Why would UNT put on a production about a homosexual male that got beaten to death?" Honestly I did not want to see it at all. ...read more.

My assumption about the audience is that most of them were there because they had to be as part of a class. Do not get me wrong, I am sure that some of the people were there because they wanted to be, but to my belief most of them were there because they had to be. This showed when the audience members began to look really bored. This was shown by yawning, stretching, fidgeting, and body language. By what I could absorb through all of the above, I do not think that many of the audience members liked the play. The Laramie Project definitely had it's ups and it's downs. It had MANY parts where it bored me to death, but the director and actors enlightened it with some comic relief every now and then. Because of this, if The Laramie Project had to be a color, I would call it purple. Purple is a dark, dull color but at the same time it is still a little bright and colorful. ...read more.

When the play starts, everything is completely back except one light that shines over the wooden box. All of a sudden a far left door opens to shine in the brightest light in the room. It stretches across the room and through it come the actors with a casket with Matthew Shepard "in it". Both of these lighting techniques gave off a sad and dark mood to the production. Really the only sound throughout the play were the actor's voices and a song that they sang. I do not remember what the song was, but I know that is was a very sad and emotional song which set the mood to be exactly that. Overall, I would have to say that I did NOT enjoy The Laramie Project. However, I am glad that I was assigned to watch this, because truthfully I did not even know about the tragedy. This experience helps me to think a lot more about the treatment of homosexuals and of just PEOPLE in general. I feel that every person should learn from this experience even if they had no bad intention to begin with. I will be praying for Matthew Shepard's family always. Lauren Mills Mills 1 THEA1340 April 16, 2003 ...read more.