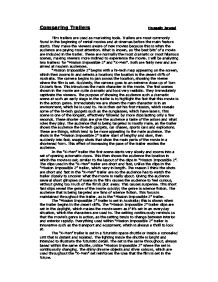 I will be analysing two trailers: for &quot;Mission Impossible 2&quot; and &quot;X-Men&quot;.

Comparing Trailers Hussain Jawad Film trailers are used as marketing tools. Trailers are most commonly found in the beginning of rental movies and at cinemas before the main feature starts. They make the viewers aware of new movies because this is when the audience are paying most attention. What is known, as 'the best bits' of a movie are included in the trailer. These are normally the most dramatic or most hilarious scenes, making viewers more inclined to experience the movie. I will be analysing two trailers: for "Mission Impossible 2" and "X-Men". Both are fairly new and are aimed at modern audiences. "Mission Impossible 2" begins with a hi-tech map appearing on the screen, which then zooms in and selects a location; the location is the desert cliffs of Australia. The camera begins to pan across the location, showing the viewer where the film is set. Suddenly, the camera goes to an extreme close up of Tom Cruise's face. This introduces the main character in the movie. The first scenes shown in the movie are quite dramatic and look very realistic. They immediately captivate the viewers. The purpose of showing the audience such a dramatic scene at such an early stage in the trailer is to highlight the fact that this movie is in the action genre. Immediately we are shown the main character is in an environment, which he is used to. ...read more.

Everything used within "Mission Impossible 2" trailer is innovative such as the transport and equipment, which is always a thrill to look at. The "X-Men" trailer is set in a futuristic space shuttle or inside a concealed unit that is distant and isolated. The lighting inside the shuttle is bright and intended to illustrate the futuristic detail. The set is the same throughout, always based within the same shuttle, unlike "Mission Impossible 2" where the set is continuously changing. The shiny chrome objects and silver colours, which are used throughout the "X-Men" set reinforces the idea that the film is set in the future. There are two central characters in "Mission Impossible 2" they are Ethan Hunt played by Tom Cruise and Thandie Newton played by Nyah Hall. Both actors are famous within the film industry. The costumes the characters wear in the move are modern and casual. This demonstrates the audience that they are used to their surroundings and that immediately establishes that the time period is current. In "X-Men" there are many different characters, making it difficult for an audience to decide on a main character. All the characters are dressed in tight PVC suits and some of the characters have dyed hair or wigs. This shows the audience that they are of an alternative nature, unlike "Mission Impossible 2" where the characters are dressed to look human. ...read more.