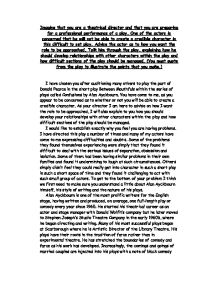 Imagine that you are a theatrical director and that you are preparing for a professional performance of a play. One of the actors is concerned that he will not be able to create a credible character in this difficult to set play - Advise.

Yes please" and to Mrs Pearce "(fiercely) Could you kindly try and control yourself" It is essential that you make this extremely meaningful. The audience should be left feeling that they know the character of Donald Pearce inside out and that he is not someone they would choose to be friends with. I have talked to you about the beginning of the play and I have talked to you about the end of the play but I haven't really talked much to you about the middle of the play. There is a very amusing conversation between Pearce and his wife where Pearce finds himself having to read out the menu over and over again to Mrs Pearce as she has forgotten her reading glasses: "Mrs Pearce: 'My reading glasses. I've left them at home" and later on: "Mr Pearce: '(fading up) ... Dover sole meuniere. Lobster thermidor. Lobster americaine brackets when in season. Scampi - all sorts of scampi - grilled halibut ... (he fades out).' This could possibly be the section of the play which receives the most laughs from the audience but it is all to do with timing, which I am going to go on to talk about next. Timing is an essential factor in all plays produced at this level but it is particularly important in Between Mouthfuls. The reason for this is because the audience has to follow two conversations at the same time. If you do not pick up where you left off then there is no way the audience is going to be able to follow what is going on. ...read more.

For every detail we should be thinking how the audience would see it, how they would react, would it make them laugh and would it make them forget everything else around them and make them fully focussed on the play. The audience should feel involved, they should leave the theatre feeling that they have been involved in something magical, something they will never forget. Due to this fact the actors should really know thoroughly not just their lines but also their character and the background of the play they are performing in. They should be proud of their performance if they feel they have done well and they have really felt that they were their character then it will have seemed this way to the audience. In Alan Ayckbourn's own words: "Always work with something you admire and not with something you only set out to make fun of. That way you might even manage to raise your game rather than lower it." In the end I would say I am your director and I am here to help and advise you in the best way that I can, but at the end of the day I am not the actor and cannot do the job for you. I can tell you the way I would like things to be done but it is up to you to go away and out it into context. I have given you all the aid I think you need and my last point would be to say to you to always remember that although Alan Ayckbourn's plays are produced in the medium of comedy they all deal with society, they all present a gloomy prediction of a possible future world where society, as a result of the behaviour portrayed, has all but collapsed. ...read more.