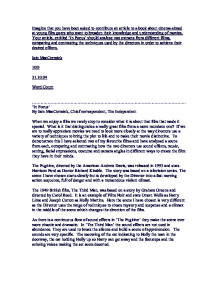 Imagine that youhave been asked to contribute an article to a book about cinema aimed at young film goers who want to broaden their knowledge and understanding of movies.

The scene opens on a cold night in a deserted, silent and cobbled street of post war Vienna and later moves to a large empty square, (except for an obelisk in the centre). The viewer feels uneasy for Holly Martins who appears alone, as anyone could be sneaking up on him; especially as there are so many dark corners and places to hide. The director has lit the set with very intense and focused lights creating areas of extreme light and dark although the viewer is made to believe that the light is coming from the street lamps, and later from a light being turned on in an upstairs window. Later in the square concentrated lighting is used to make the cobbles glisten. This emphasises the bleakness of the buildings and the appearance of Harry Lime, who up to this point has been thought dead. The scene is set on a prison bus transferring convicted criminals to a penitentiary where they are to await execution. The bus is stark and devoid of any comfort. Tension is created as the central character, the innocent Richard Kimble, finds himself trapped with dangerous criminals behind a metal grill which separates them from the driver and guards. ...read more.

It quickly changes to shots of the prisoners to show us the important things happening in the bus. We get a series of close ups of all of the prisoners glancing at each other which includes two over the shoulder shots. These show us who the characters are scheming with. After the officer has been stabbed the film is a series of edited shots of close ups of the characters, the action in the bus and the tracking shot of the bus moving along the road - in quick succession. This goes along with the speed of events happening in the bus. The directors use a variety of techniques to create different effects in the two scenes. 'The Fugitive' is a fast moving action sequence building up to a tremendous violent climax although the scene in 'The Third Man' is slower and the climax is in the middle when Harry reveals himself. The different uses of techniques create very different types of tension. Tension in one is linked to danger and violence and in the other to mystery and suspense. So when we look in more detail at film making, we can see that there is much more to a film than the plot, script and actors. It is the techniques that the Directors use that create the effects they desire. ...read more.