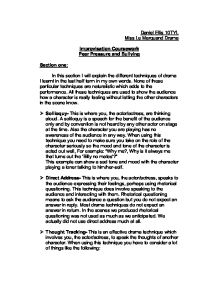 Daniel Ellis 10TYL Miss Le Marquand Drama Improvisation Coursework Peer Pressure and Bullying Section one: In this section I will explain the different techniques of drama I learnt in the last half term in my own words. None of these particular techniques are naturalistic which adds to the performance. All these techniques are used to show the audience how a character is really feeling without letting the other characters in the scene know. > Soliloquy- This is where you, the actor/actress, are thinking aloud. A soliloquy is a speech for the benefit of the audience only and by convention is not heard by any other actor on stage at the time. Also the character you are playing has no awareness of the audience in any way. When using this technique you need to make sure you take on the role of the character seriously so the mood and tone of the character is acted out well, For example: "Why me?, Why is it always me that turns out the 'Billy no mates'?" This example can show a sad tone and mood with the character playing a loner talking to him/her-self. > Direct Address- This is where you, the actor/actress, speaks to the audience expressing their feelings, perhaps using rhetorical questioning. This technique does involve speaking to the audience and interacting with them. ...read more.

I mean look at the rating on how the day went...Yeah that's right minus five out of ten. I feel so depressed and upset. Well I'll take you through the whole day of hell. Firstly I got on the bus and sat in about the middle. You know all the cool and popular people sat at the back as usual. And to me they are premature hell waiting for me to give in and be taking to hell. John smith came up to me, and I thought he was being genuine, but that was the mistake I made. He shook my hand and smothered it in permanent ink. I should have noticed why he had that glove on his hand. I tried wiping it on the bus seat but when I went to get off the bus driver shouted at me and took down my name and address to bill my Mum. All four of those cowards walked pass me and shouted Happy F*****g Birthday. Hope you liked the present. I was so close to crying that I thought the lump I had in my throat was going to explode. I had got a mobile phone for my birthday off my Mum and Dad in the morning. ...read more.

This meant that some of us thought we were doing something and some of us thought we were doing something else in that scene and that was also why we were nervous, not because we were performing in front of the people. The performance did not go well because we were too busy trying to tell each other what to do next. Obviously it wasn't a good start but if we were to improve it where we all knew what were doing then it would be better. This didn't mean we weren't working as a group. We each had so many ideas that we were confused which we were using and which we weren't. The first scene was the loner at home with her parents. Her Mum was too busy exercising and the Dad was not interested in what anyone had to say except his wife. The loner was too upset to talk to her parents and was happy doing her revision. Overall this scene could have been better. We just need to be more organised when we rehearse. Overall our 4 scenes did run to an average standard. Next time we need to consider the following: ? No corpsing. ? Organising rehearsals more. ? Using the ideas we produce wisely. ? Working more as a group and not just as individuals. ? Improvise if you don't know what to do during the scene. ...read more.