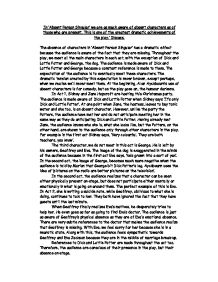 In 'Absent Person Singular' we are as much aware of absent characters as of those who are present. This is one of the greatest dramatic achievements of the play.' Discuss.

In the second act, the audience realizes that a character can be seen either physically present on-stage, but does not participate either mentally or emotionally in what is going on around them. The perfect example of this is Eva. In Act 2, she is writing a suicide note, while Geoffrey, oblivious to what she is doing, continues to talk to her. They both have ignored the fact that they have guests until the last minute. When Geoffrey finally realizes Eva's motives, he desperately tries to help her. He even goes as far as going to find Eva's doctor. The audience is just as aware of Geoffrey's physical absence as they are of Eva's emotional absence. There are very subtle references to the doctor that makes the audience realize that Geoffrey is missing. With Eva, we feel sorry for her because she is in a neurotic state. Along with this, the audience feels sympathetic towards Geoffrey and Eva Jackson because they are in the middle of marriage break-up. References to Dick and Lottie Potter are made throughout the act too. ...read more.

Even though, they are absent, they are talked of. Again, this shows the tragic side of the play. When the audience is told that George has been given away because the Jackson's cannot afford to keep him, they sympathize for them. The audience learn that the Potters have taken Ronald's children mountaineering. When Ronald says, 'I always meant to take them on myself', the audience has sympathy for him because it is unfortunate that he is unable to take his own children somewhere when he wanted to. 'Absurd Person Singular' is based on changes in life and how the humour that follows it. The audience is very aware when characters are absent in the play they are impinging on their thoughts. I think that Ayckbourn uses this technique deliberately to keep the audience aware of all the characters, both on-stage and off-stage. As mentioned before the play slowly moves towards a tragedy, with its traumas and dilemmas. I think this a great dramatic achievement because it shows that Ayckbourn was written the play so that the audience is focused on all the characters not just the characters on-stage. ...read more.