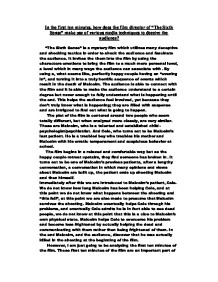 In the first ten minutes, how does the film director of &quot;The Sixth Sense&quot; make use of various media techniques to deceive the audience?

In the first ten minutes, how does the film director of "The Sixth Sense" make use of various media techniques to deceive the audience? "The Sixth Sense" is a mystery film which utilizes many deceptive and shocking tactics in order to shock the audience and fascinate the audience. It invites the them into the film by using the characters emotions to bring the film to a much more personal level, a level which in many ways the audience can associate with. By using a, what seems like, perfectly happy couple having an "evening in", and turning it into a truly horrific sequence of events which result in the death of Malcolm. The audience is able to connect with the film and it is able to make the audience understand to a certain degree but never enough to fully understand what is happening until the end. This helps the audience feel involved, yet because they don't truly know what is happening; they are filled with suspense and are intrigued to find out what is going to happen. The plot of the film is centered around two people who seem totally different, but when analyzed more closely, are very similar. These are Malcolm, who is a talented and established child-psychologist/psychiatrist. And Cole, who turns out to be Malcolm's last patient. He is a troubled boy who troubles his mother and Malcolm with his erratic temperament and suspicious behavior at school. ...read more.

As this light bulb is being turned on, we are introduced to the first character, Anna. The camera moves to look towards Anna from a point of view which she should be able to see the source of, this implies a ghostly presence in the cellar. The bars of the wine cellar looks like us or Anna are imprisoned, or we are blocked out. In relation to the background Anna is vividly colourful as the background is black and she is wearing a purple dress, making her the main focus. We are then moved to a close up of Anna and a side view of her shadow. As an audience we don't seemed trapped anymore in the situation. The scene ends as it started; trapped again when Anna runs up the stairs. The different media techniques used in this overall section to deceive us are camera angles and lighting. This already establishes a misleading yet hooking section filled with suspense to establish the mood. However different moods are already established at this stage; depending on what you personally believe because of the techniques. The second section begins with a medium shot and is a shot of Malcolm and Anna looking into Malcolm's plaque of achievements as a child psychiatrist. This is ironic as he is about to die from his "achievements" so we are falsely misled here through the fact that we are unaware of previous goings on. ...read more.

Once again the audience is deceived, but this time they are conscious of the deception as opposed to the previous trend of deception in which they only realize they have been deceived until the very end. The final section within the section is seen to the audience as a new beginning. This is shown in white writing at the begging of the shot reading, "The next fall". This could be relating to what happened previously by using the word "next" or it may also mean "Autumn". This misleads the audience by not being clear and so the audience is just left to suspect what they think is going on. It is symmetrical and is almost a perfect situation to be set in. This once again misleads the audience in thinking that everything is okay when in fact it is the opposite. In conclusion, in the main reason we the audience are deceived in the first ten minutes is with media techniques used in the film such as lighting, camera shots, colours and characters emotions and setting. The audience are never fully aware of what is actually happening as they are never shown clearly. They are left in the dark just as much as the characters are, making the audience more able to relate with the characters and their emotions. This type of film will have future success in my opinion as it hooks the audience from the beginning right through to the very end as the audience relates and feels what is going on as well as the character. ?? ?? ?? ?? ...read more.