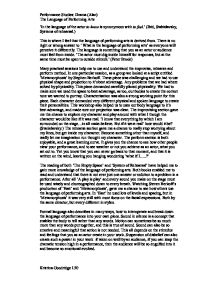 'In the language of the actor to know is synonymous with to feel.'

'In the language of the actor to know is synonymous with to feel.' (Ibid, Stabislavsky, Systems of rehearsal.) This is where I feel that the language of performing arts is derived from. There is no right or wrong answer to ' What is the language of performing arts' as everyone will perceive it differently. The language is something that you as an actor or audience must feel from inside. 'The actor must dig inside himself for responses, but at the same time must be open to outside stimuli.' (Peter Brook) Many practical sessions help me to use and understand the improvise, rehearse and perform method. In one particular session, as a group we looked at a script entitled 'Metamorphosis' by Stephen Berkoff. These piece was challenging and we had to use physical shape and projection to it's best advantage. Any problems that we had where solved by physicality. This piece demanded carefully planed physicality. We had to make sure we used the space to best advantage, as too, our bodies to create the correct tone we wanted to portray. ...read more.

In 'East' he used lots of levels and spacing, but in 'Metamorphosis' it was very still with most focus on the facial expressions. Both by the same director, but every different in styles. Formal language also describes in many ways, how to interoperate and break down the language of performance into your own piece. Sound in silence is a concept that enables the body to tell rather than any words. Motion can sometimes be so much more than any words put together, and this is true of sound. Sound can also be so emotive and meaningful that action is not needed. This all depends on the stimulus and feelings that you as an actor create in your work. Suspension of disbelief can also create such a power in your work if taken on well by an audience, if you can keep the dramatic tension high in a performance, then the audience will be so engulfed into it and become so emotional evolved. The energy, focus and concentration given by actors creates such an impact on a performance, that it is worth applauding at the end. ...read more.

Audiences become emotional evolved. From gaining knowledge about the language of performing arts, I am able to relate it not just to drama, but to music and dance. They have their own language too, that show many other expressions that drama cannot. My whole perception has changed through understanding the hidden language. I am more aware of spacing and levels that should be used, and in some cases not used. I am more careful when choosing dialogue making sure that it is formal, with no pointless interaction. I am more aware of my physicality and I am able to also understand this when watching live performances. I am able to fully understand how to gain the best out of my time, using the improvise, rehearse and perform method. This method makes sure that each part of a work piece is done to the best of my ability. I also understand how much everything I do on a stage is so important, simple from a breath write down to a movement. Everything on a stage must have a meaning. 'Theatre and life are one!' ( Peter Brook. ) Performance Studies: Drama (Alan) The Language of Performing Arts Kristina Goodridge L50 ...read more.